Settling down to married life and farming at Chimbada Farm in Raffingora. 1970.

Farming at Raffingora was something entirely new to me; our main crop was cotton, which involved quite long and hard work during the picking season. It had to be continually watched and treated for unwanted insects and disease;  the spray plane came in regularly! When we were picking, all the staff and their families, children included, were busy during all daylight hours and they were paid according to weight picked. Pickers were also shared, being moved around between neighbouring farms to keep up with the work required, hoping that everyone's crop did not need picking quite at the same time! 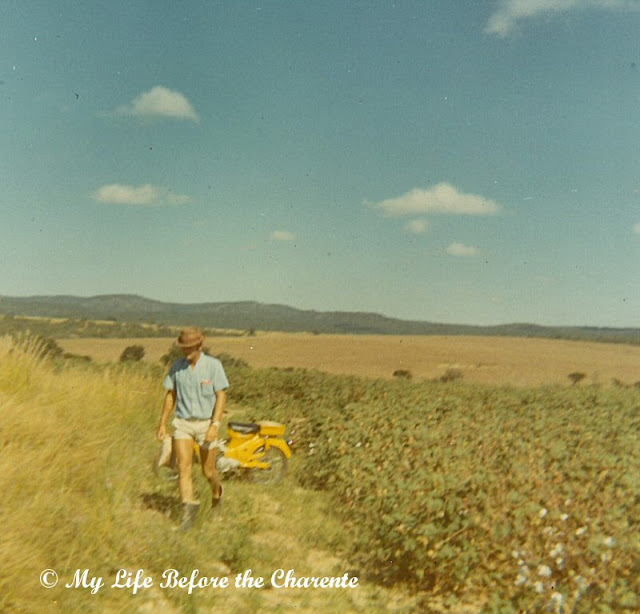 Neil checking the cotton; behind him, his means of transport around the farm! 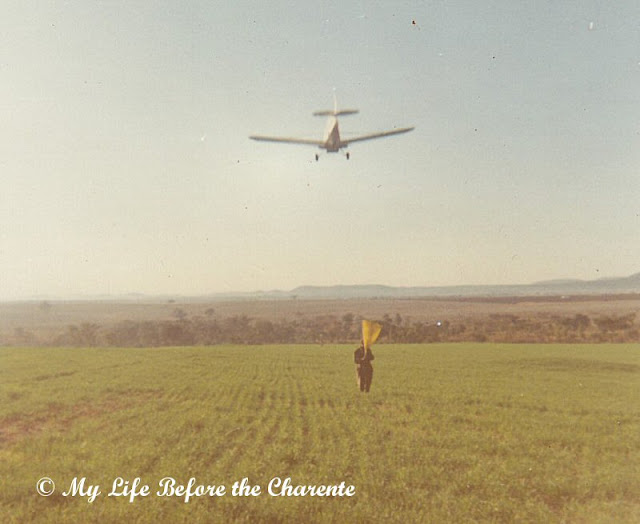 Crop spraying.  Note the guy with the marker!  Not at all healthy for him, I imagine! I am sure today with GPS navigation this would not be necessary. 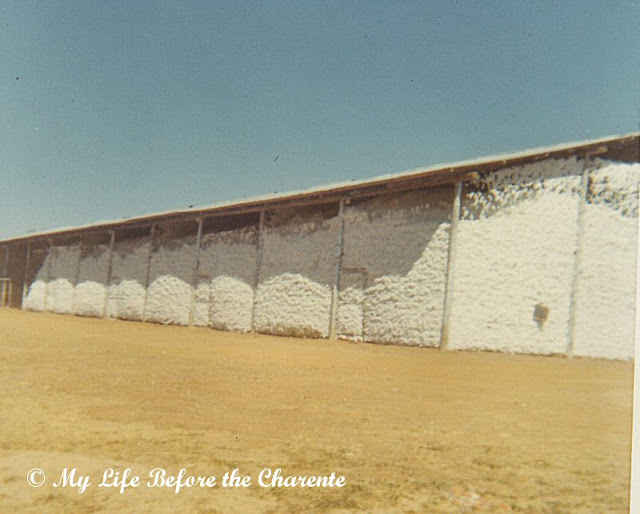 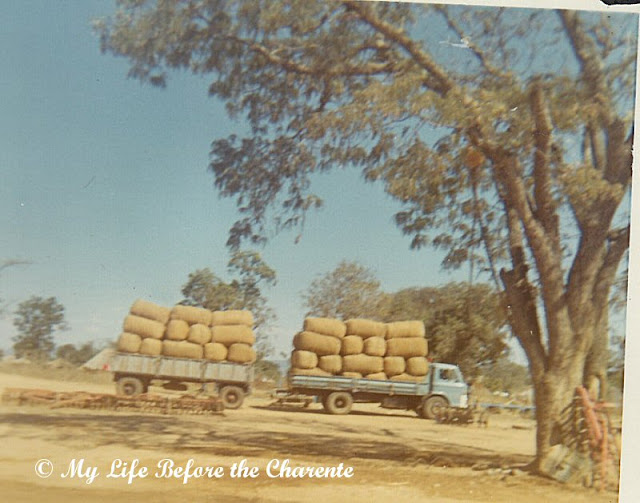 Baled and off for sale.

In winter, we grew wheat.  Not as time consuming as cotton, but also a lot of work keeping an eye on growth and potential problems. 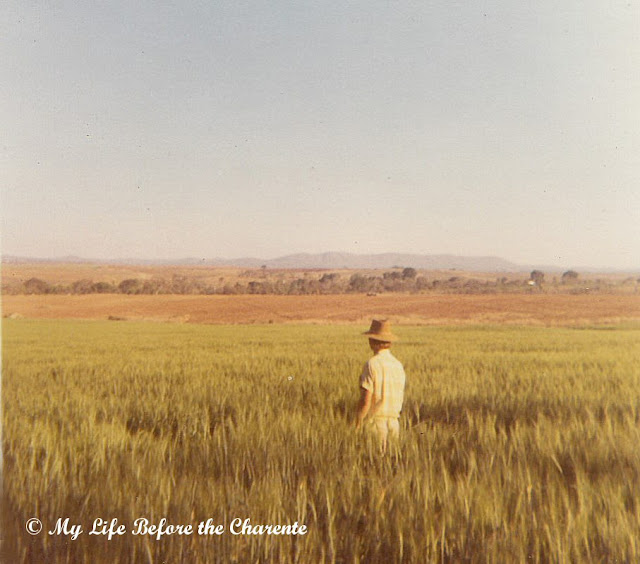 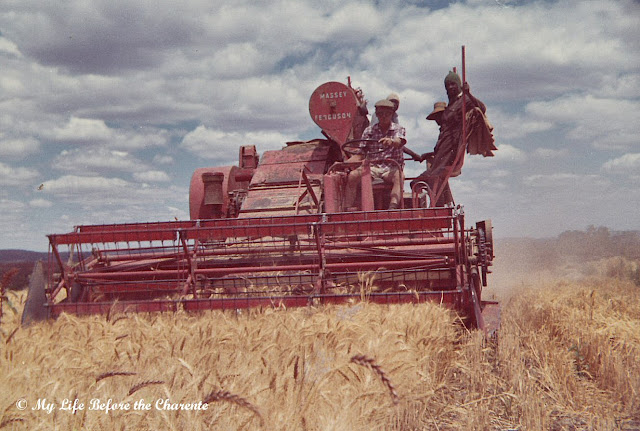 The combine harvester at work.

As for the farm house, I loved it! It was small with only two bedrooms, but it suited us well. We had no electricity and this took some getting used to. Water was heated outside the back door in a huge drum,  with a log fire built in underneath it. We had a young black guy who came in and cleaned the house for us; another of his jobs was to see that the fire never went out under the water drum! We had an elderly wood stove in the kitchen which was always kept burning; the only time it ever went out was in the height of summer, when I could not stand the heat any more! For those times, we bought a couple of small gas burners for cooking the essentials. Sadly I never took any photos of the inside of the house. (I was not a blogger in those days!) 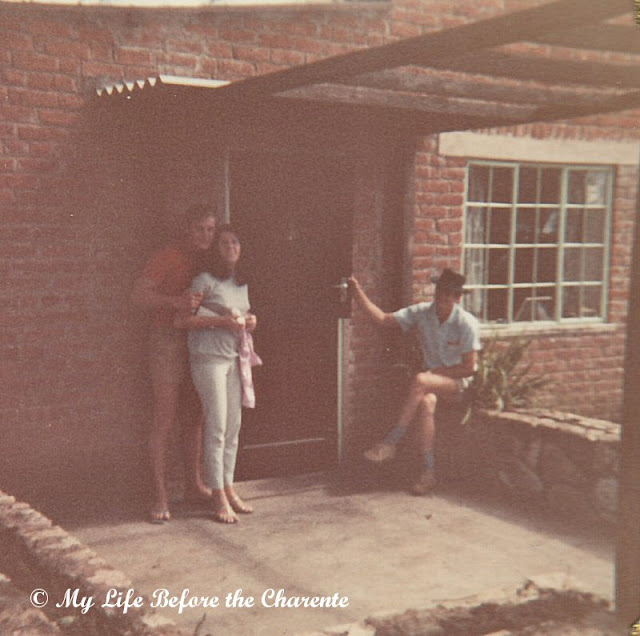 The only photo I have of the house is this misty looking picture of the front door with Neil sitting on the wall and his brother and fiancée, who were visiting, standing.

Next door to us was the main house on the farm, where lived friends Wendy and Neville. They had arrived a couple of years before us. They had electricity, so we occasionally had the chance to catch up on world news on their TV! Wendy strangely enough had also been at Arundel school, though being a year older was one class ahead of me. It was good, though, to have someone I knew close at hand and she had two lovely children whom she schooled on the farm. She also had a passion for gardening, so we were lucky enough to be able to enjoy her terraced garden which led down to the Hunyani river. 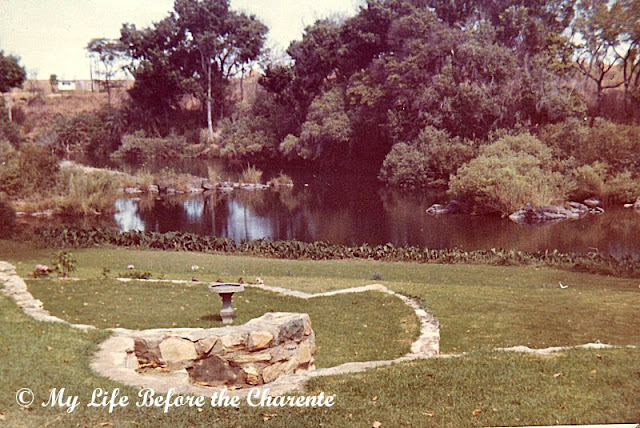 Wendy's garden looking down at the river, in a tranquil state in the dry season when this was taken. 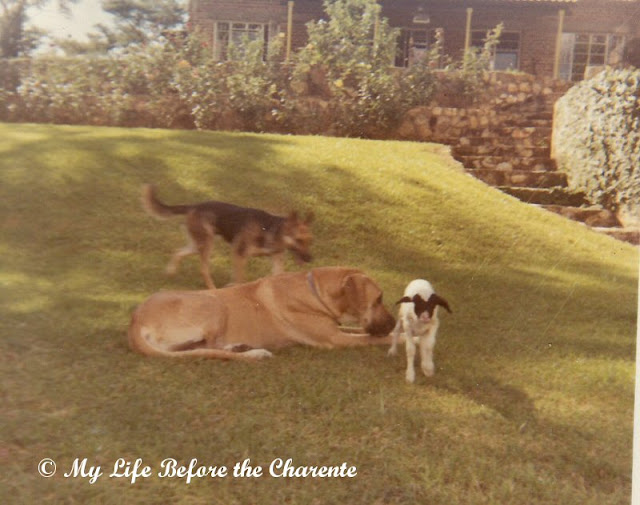 Rocky my Great Dane in the garden looking after a lamb that we were bottle feeding; they became very attached to each other!   We had a small herd of sheep and this poor lamb lost its mother giving birth.  In the background is Neil's German shepherd Pandora.

The source of the Hunyani river is at Marandellas; it gets progressively wider until it reaches the town of Sinoia (close to our farm) and from there it crosses into Mozambique where it becomes the Pahame river, eventually joining up with the mighty Zambezi, the fourth largest river in Africa. When the Hunyani was in flood, we could not get off the farm by way of  the bridge near Sinoia, so we bought a small motor boat, in which we used to cross the river. 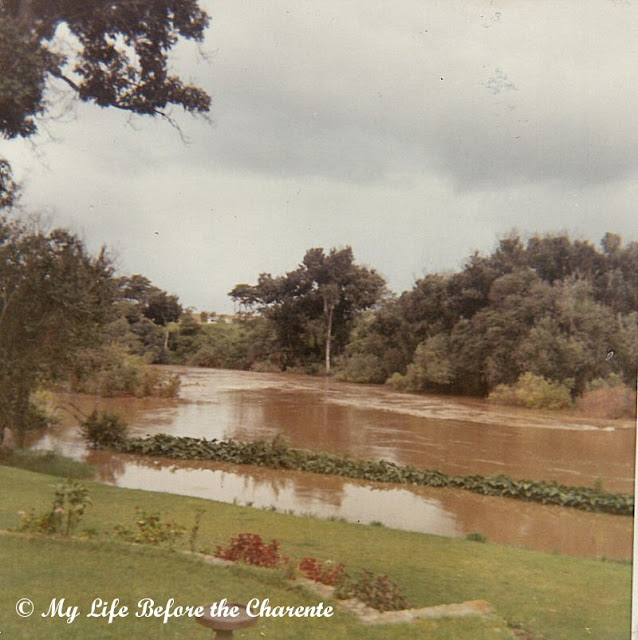 The river in flood, full of mud, covering the bottom of Wendy's garden. That mud acted as good top soil when the water level went down again! 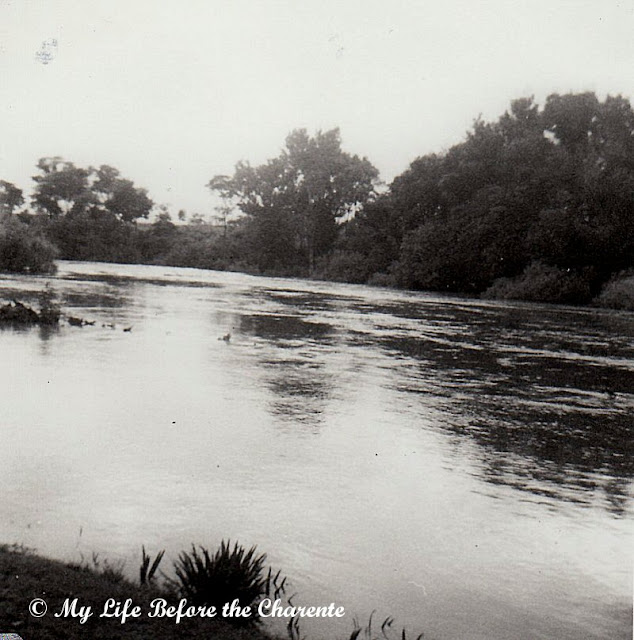 Creeping up the garden getting ever closer to the house.  It never quite made it past the final step to cause a problem in the house!

We would leave our car on the farm on the opposite bank, where the owners allowed us to build a car port. Motor boating sounds like lots of fun, but crossing a fast flowing river, carrying a couple of weeks' groceries was not easy, as the bank on the opposite was quite high, and of course muddy in the summer rainy season. We used to shop in Salisbury (now Harare), which was about 80 miles from the farm, so we only went there once a fortnight.  To add to this, there was always the chance of meeting up with a crocodile, of which there were several in that area, but thankfully there were no hippos. I remember one night we had spent the evening in Raffingora, on the opposite side of the river, with neighbours and their young son from the next door farm.  A good meal, a few drinks and a game of darts had everyone a bit revved up! Returning home, rocking the boat seemed good fun until the son went overboard. A few minutes of panic and he was back in the boat, but it certainly sobered us all up very quickly. 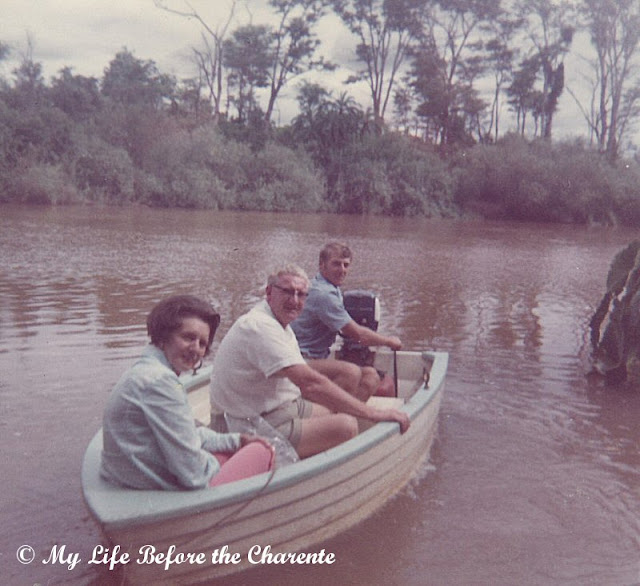 My Mum and Dad arriving for a visit. It was a shorter drive to arrive via the farm opposite us on the river, than to take the long drive around by the bridge (if it was in use!). 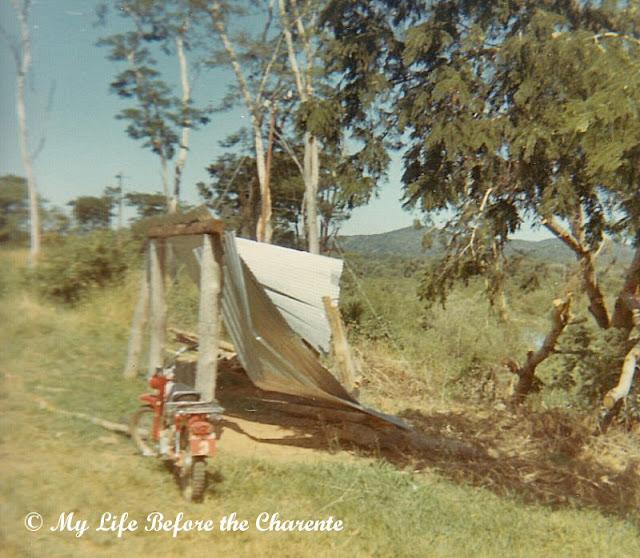 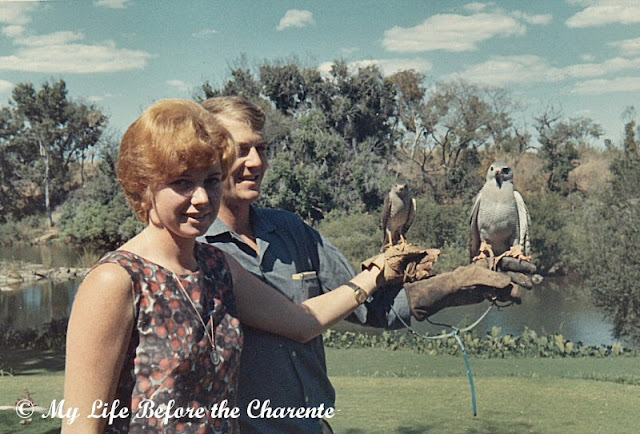 During this period, we both carried on with a little falconry, in which I had sound training from John Condy and which I have spoken about earlier in this blog.   I am with a Little Banded Goshawk and Neil is with a Lizard Buzzard.