My Mum buys a race horse.

At the end of 1963, my Mum successfully bid for a horse called Thorstone at an auction at the Borrowdale race track. 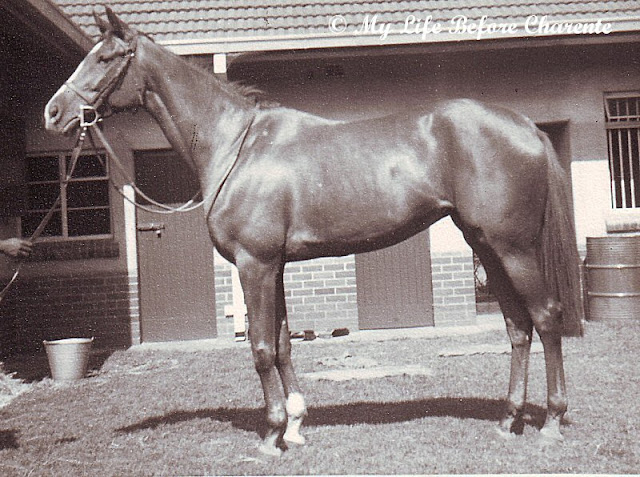 Thorstone when we bought her.

She was a large, very gangly chestnut mare who, to that date, as a two year old had shown nothing at all on the race track. Dad was convinced that as a three year old, she would fill out and with that would come the improvement he expected from her. His patience paid off and she had a number of second places, which more than paid for her keep, before finally gaining some wins. 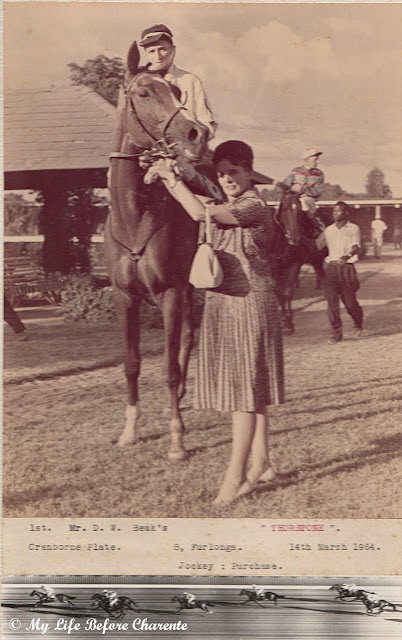 My Mum leading in Thorstone, with jockey Charles Purchase, into the winning enclosure on 14 March 1964. 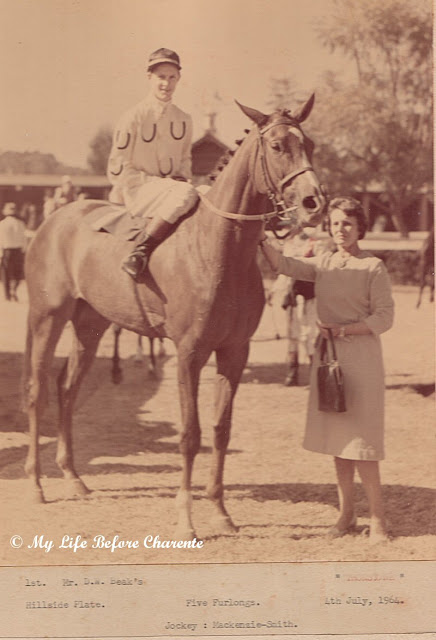 and with Jockey Ian Mackenzie-Smith 4 July 1964

In September 1965, when there was a large amateur race meeting at Borrowdale,  I partnered her, to win the main race of the day. 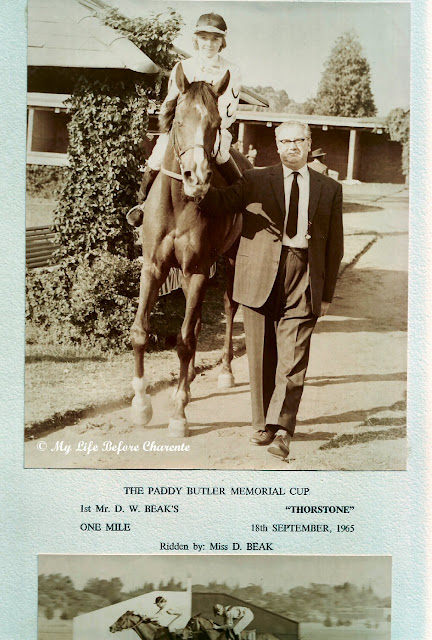 A proud Dad leading Thorstone and me into the winning enclosure.  This win actually caused a big upset, as the horse that finished second had been very heavily backed!  At least the bookmakers were happy!

I had an excellent day’s racing, achieving another two wins, riding a chestnut called Significance and a dark bay called Happy Time. 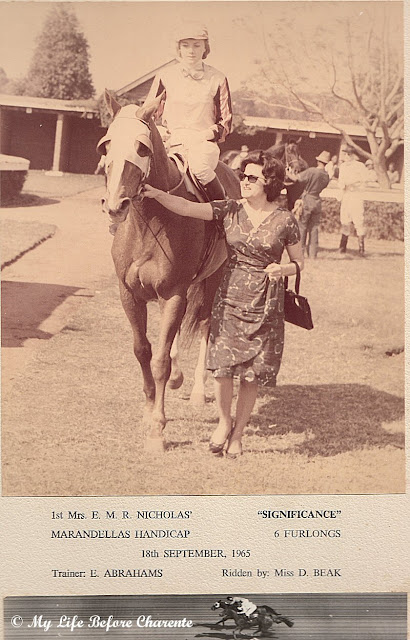 Significance owned by Mrs Nicholas, trained by Errol Abrahams and ridden by myself. Won by a short head!

Kubla Khan was still going from strength to strength and by this time he was well into A grade and competing in the Rhodesian team events. He had certainly taken over where Mr Smith had left off. He was an extremely strong horse and it had taken me some time to find the solution to the problem of keeping him under control! I came up with the idea of using a hackamore, which is a bitless bridle, and this just worked miracles with him. Suddenly I was in full control and he listened to every move I made. He was the only horse on which I had ever used one of these bridles  and I was more than impressed with the result! 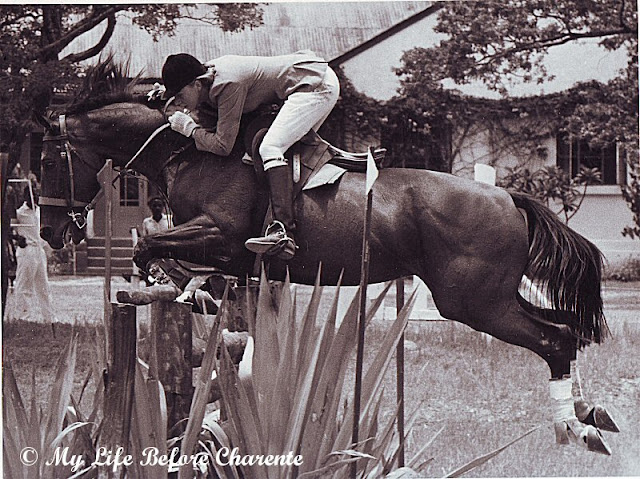 Myself, and Kubla Khan wearing a normal snaffle bit in this photo.

The next couple of years were a mixture of the Veterinary Research Laboratory, wild life work, falconry, riding Kubla Khan and competing in local shows, while at weekends, when possible, going to the farm to see Neil. 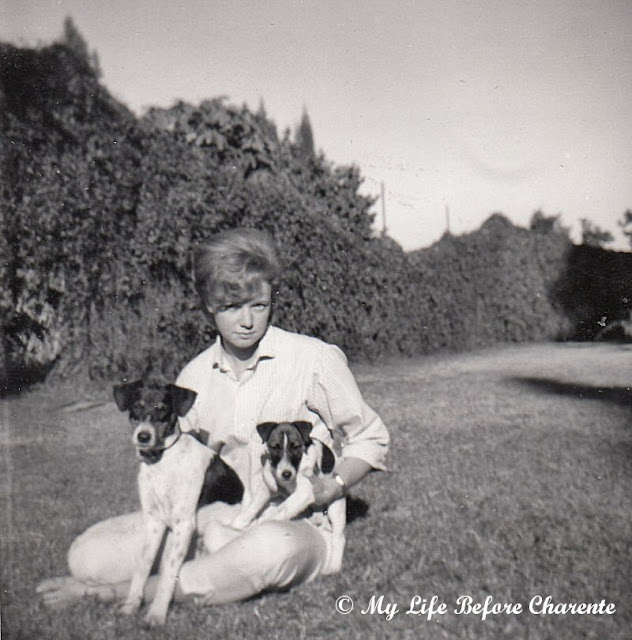 Myself on the farm with Neil's two dogs, Yogi on my right and Trixie under arm.

Dad was still training, enjoying it, and holding his own with a number of wins at the race track. 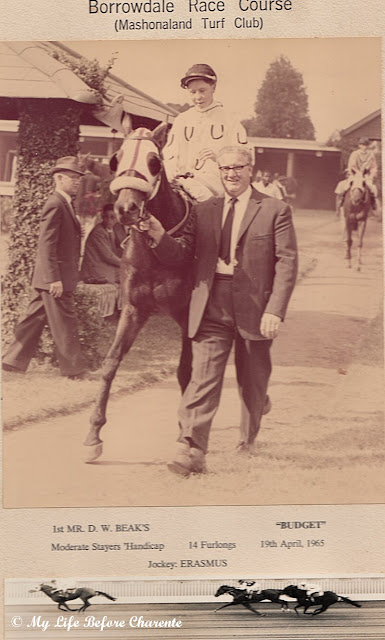 Dad leading in Budget with jockey Andrew Erasmus in the saddle.
19 April 1965 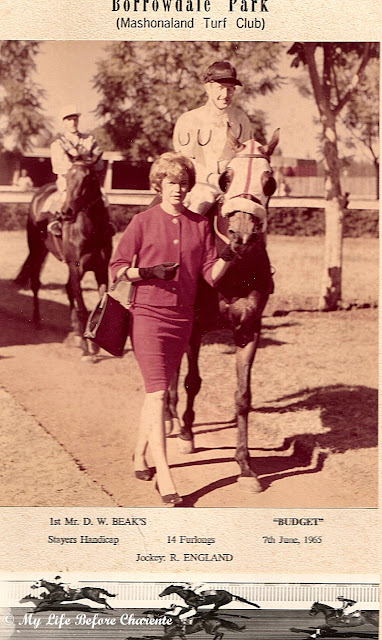 Me leading in Budget with Roddy England in the saddle.
7 June 1965