An update on my Great Dane, Rocky.

On one particular night, Dad had been going down to the stables at regular intervals to monitor a horse which was not well and on one of these occasions, while approaching the house, he saw the light of a pencil torch and someone peering through one of the windows.  He suspected we might have a  burglar!

My parents owned two poodles and this light must have made them aware that there was someone around, so they both started yapping loudly. This, in turn, disturbed Rocky and he careered around the outside of the house in full pursuit of the prowler! My father ran up the path and shouted at Rocky, who obediently returned to his side, only for Dad to discover that he was covered in blood.

His first thought was that the prowler (if that is what it was) was carrying a knife and he had slashed at Rocky, but after washing him down we discovered no marks on him at all! By this time, it was around three in the morning and as attention to Rocky had been our priority, anyone trying to break in would have undoubtedly long since disappeared! My father thought that there was little point at that stage in phoning the police, but he proposed to report the incident in the morning, which he duly did. Later that day, the police phoned us to say that a gentleman from our area had been admitted to hospital with part of his buttocks missing! The patient said that he had been out walking in the early hours and that he had been attacked by a lion! We then knew the source of all the blood which we had washed from Rocky! Up to that time, we had always thought that Rocky was very good at sounding alarms, and had the loudest growl we had ever heard, but we had had our doubts  that his "bite was as good as his bark"!  He had certainly proved us wrong with this behaviour! 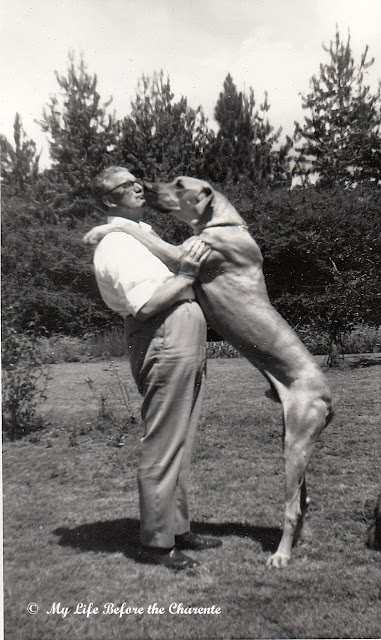 My Dad getting a big kiss from Rocky.

A couple of years later, when we were all away for the day, a police sergeant and a constable came to speak to my father about a car of his which had been stolen. They arrived at the house, opened the gate and Rocky, who met them on their way down the drive, happily walked along with them. They walked onto the verandah and after knocking at the front door several times, they realised there was nobody at home. They turned to leave, only to find Rocky lying in the entrance to the verandah, growling at them. Neither was brave enough to find out how serious he was and it was some several hours later when one of the stable hands came up to the house to check on something, that the situation was discovered. When the police phoned Dad the next day, they said that they felt absolute fools, but after that earlier prowler episode, I am sure that they did the right thing by not taking any chances with him. 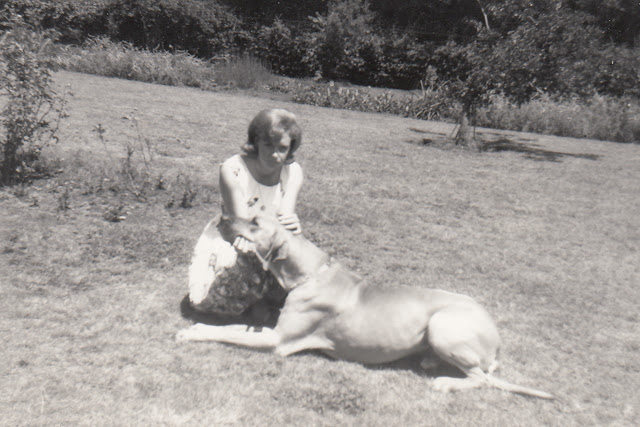 What a great dog he turned out to be and I was always very confident when he was by my side.