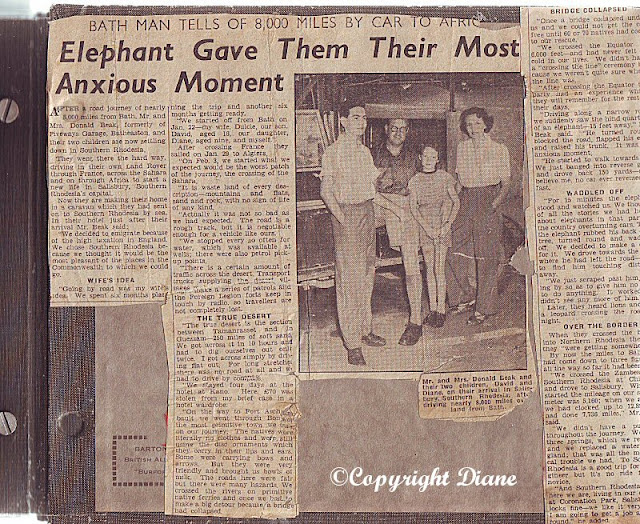 I  thought that, before I start the story of my life in Rhodesia,  I would include this newspaper cutting which was printed in the Evening Chronicle, the daily paper circulated in the Bath area in Somerset, shortly after our arrival in Salisbury.

As it is difficult to read, this is a reprint.

Elephant Gave Them Their Most Anxious Moment.

After a road journey of nearly 8,000 miles from Bath, Mr and Mrs Donald Beak, formerly of Fiveways Garage, Batheaston, and their two children are now settling down in Southern Rhodesia.

They went there the hard way, driving in their own Land Rover through France, across the Sahara and on through Africa, to start a new life in Salisbury, Southern Rhodesia's capital.

Now they are making their home in a caravan which they had sent on to Southern Rhodesia by sea.  In their hotel just after their arrival Mr Beak said " We decided to emigrate because of the high taxation in England.  We chose Southern Rhodesia because we thought it would be the most pleasant of the places in the Commonwealth, to which we could go.

"Going by road was my wife's idea.  We spent six months planning the trip and another six months getting ready.  We started off from Bath on Jan 22 - my wife Dulcie, our son David, aged 16 and our daughter Diane aged nine, and myself."

After crossing France they sailed on Jan 29 to Algiers.  "On Feb 3, we started what we expected would be the worst patch of the journey, the crossing of the Sahara.  It is waste land of every description - mountains and flats, sand and rock, with no sign of life of any kind.

"Actually it was not as bad as we had expected.  The road is a rough track, but it was negotiable for a vehicle like ours.

"We stopped every so often for water, which was available at wells; there was also petrol at pick up points.

"There is a certain amount of traffic across the desert.  Transport trucks supplying the desert villages make a series of patrols and the Foreign Legion forts keep in touch by radio, so travellers are not completely lost."

"The true desert is the section between Tamanrasset and In Guezzam - 250 miles of soft sand.  We got across it in 10 hours and had to dig ourselves out only twice.  I got across by simply driving flat out.  For long stretches there was no road at all and we had to drive by compass.

"We stayed four days at the hotel in Kano.  Here £70 was stolen from my brief case in a hotel wardrobe.

"On the way to Fort Archambault we went through Bongor, the most primitive town we saw on our journey,  The natives wore literally no clothes and were still using the disc ornaments which they carry in the lips and ears.  Some were carrying bows and arrows. They were though very friendly and brought us a bowl of milk.  The roads here were fair, but there were many hazards. We crossed the rivers on primitive native ferries and once we had to make a big detour because a bridge had collapsed.

"Once a bridge collapsed under us and we could not get the car free until 60 or 70 natives had come to our rescue.

"We crossed the equator at 6,000 feet and had never felt so cold in our lives.  We did not have a 'crossing the line ceremony' because we were not quite sure where the line was."

After crossing the equator, the party had an experience which they will remember for the rest of their days.
"Driving along a narrow road we suddenly saw the hind quarters of an elephant - 15 feet away"  Mr Beak said.  "He turned around, blocked the road, flapped his ears and raised his trunk; it was an anxious moment. "He started to walk towards us.  We just banged into reverse gear and drove back 150 yards - and believe me, no car ever reversed so fast!

"For 15 minutes the elephant stood and watched us.  We thought of all the stories we had heard about elephants in that part of the country over-turning cars.  Then the elephant rubbed his back on a tree, turned and waddled off.  We decided to make a dash for it.  We drove towards the spot where he had left the road - only to find him touching distance away.  We just scraped past him racing by so as to give him no time to do anything.  It worked - we didn't see any more of him."

Later they heard lions, and saw a leopard crossing the road at night.

When they crossed the border into Northern Rhodesia they felt they "were getting somewhere".  By now the miles to Salisbury had come down to 3 figures - all the way so far it had been four.

"We crossed the Zambezi into Southern Rhodesia at Chirundu and drove to Salisbury.  When we started the mileage on our speedometer was 5,160; when we arrived  we had clocked up to 12,896 - we had done 7,736 miles" Mr Beak said.

" We didn't have a puncture throughout the journey. We broke three springs, which we replaced, and we replaced a water pump gland; that was all the mechanical trouble we had.  To drive to Southern Rhodesia is a good trip for an engineer, but it's no ride for a novice.

"And Southern Rhodesia, well here we are now, living in our caravan at Coronation park, Salisbury;.  It looks fine - we like it very much.  I am going to get a job and look around" he added.