Setting up a new home in Southern Rhodesia.


After a very lazy start to the morning, we went out to check the Land Rover and go for a walk. We found ourselves walking over a bridge by the railway station; great excitement, there was our caravan on a goods wagon, right below us! We had been told that it would take at least two months to arrive, so this was completely unexpected. We later discovered that each and every person who had handled the caravan during its trip was worried about damage and it was hurried through every port with no delays. Our life was really now about to begin in our new country, as our home had arrived!

Later in the day, my father went outside to check on the Land Rover again and there he found a gentleman walking round and round the vehicle and showing a great deal of interest. He saw my Dad and said “Hey have a look at this, I am sure that this vehicle must have driven overland from England looking at the condition of it and the tell-tale number plates”! For a lark, Dad just replied  “Do you really think so?” and a long conversation carried on from there, with Dad never letting on he was the driver!  He came back into the hotel laughing and related the entire story to us.

Also later that day, the press arrived at the hotel, and many photos and stories later, we appeared as headline news in the Rhodesian Herald newspaper. We often wondered if the guy who had been talking to my Dad earlier saw the paper the following day and put two and two together!  As a result of the article, my Dad received a call from a local garage and was offered a job, starting as soon as he was able!

Our first priority was to clear the caravan through Customs and find somewhere to park it. We found a camping park on the outskirts of Salisbury and, with no problems, rented a site and by the end of the week we were ‘at home’ in the caravan with all mod cons laid on!  David at 16 had left school in England with ideas of finding a job on arrival in Rhodesia. Both Mum and Dad were surprised when he said that he wanted to become a mechanic, as prior to the trip and in helping Dad on our journey, he had shown no interest in anything mechanical. As it happened, he managed to sign up as an apprentice very soon after our arrival and as each year passed, he was never anywhere other than top of the class!  At nine of course, I had to go back to school and although both Mum and Dad did everything possible to try to get me into a private school, I ended up at the local government school for the remainder of 1953. We only discovered later that the camp-site had a very bad name and this mention of our address put a halt  to any possibility of a private school accepting me!
The other very important factor at this stage, was to find a doctor for me to have a complete check up and make sure that I could continue with all sports at school and live a normal life once more. This was duly done and I was given a completely clean bill of health!

It is interesting to note that the year of our arrival was the centenary year of the birth of Cecil John Rhodes.  Some of the one shilling stamps were reproduced on postcards as collector's items, two of which are shown below. 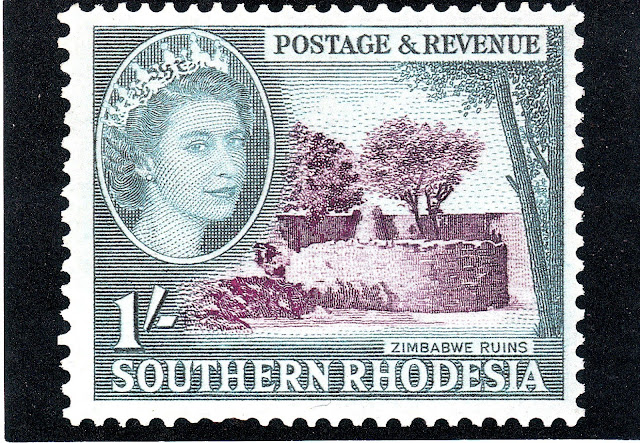 On the back of the cards I found the following information:
(Southern Rhodesia 1/- 1953) GREAT ZIMBABWE. The ruins of Great Zimbabwe are the most extensive, yet most mysterious in sub-Saharan Africa.  The settlement is believed to have been started about 800 A.D. and then deserted about 1600 A.D. owing to the lack of firewood and grazing in the surrounding area. It may have been a compound for holding slaves prior to their shipment across the Indian Ocean at Sofala. (Beira, Mozambique) 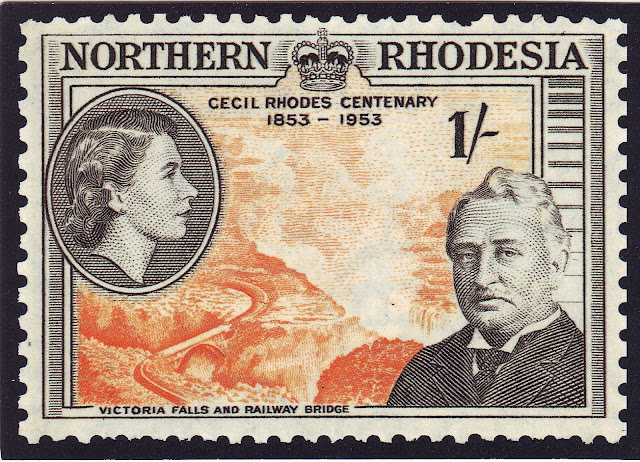 (Northern Rhodesia 1/- 1953) NORTHERN RHODESIA/VICTORIA FALLS. Issued to commemerate the centenary of the birth of Cecil John Rhodes, 1853 - 1953, this stamp depicits an aerial view of the Victoria Falls and the bridge taken from the N. Rhodesian side.  It was Rhodes who instructed that the bridge be built within spray-distance of the falls, although he never saw it himself.

The section of my life story during our overland trip is published on Kindle if you should be interested:-
See
http://www.amazon.co.uk/THE-GREAT-1953-TREK-ebook/dp/B008KK0KHU/ref=pd_ys_iyr1
Posted by Zimbabwe at 02:59