Getting back to normal living and the arrival of Felix.

We all soon settled down to a normal routine, but in a very different environment from that we had in Somerset; David and Dad went off to work each day, it was school for me and Mum returned to being a housewife. Two months passed by and Dad returned home early from work with a small bundle.   He had met a hunter at the garage, newly returned from an expedition. Apparently, while out in the bush, they had found a female leopard caught in a trap and her state was such that they had to put her out of her misery.  They then realised that she was heavy with milk and that she must have cubs somewhere.  The trackers were put to work and they soon discovered two tiny cubs with their eyes still closed and mewing with hunger.  To this day, I never found out how Dad really got involved, but the end result was that we were living in a caravan and bringing up a leopard cub!  The hunter had said he could only cope with one and was at his wits' end what to do with the other; a daft thing to say with my father around, as he loved any type of animal!  He always said that if it had not been for the war and becoming an engineer in the Merchant Navy, plus of course his parents owning a petrol and service station, he would liked to have been a veterinary surgeon. 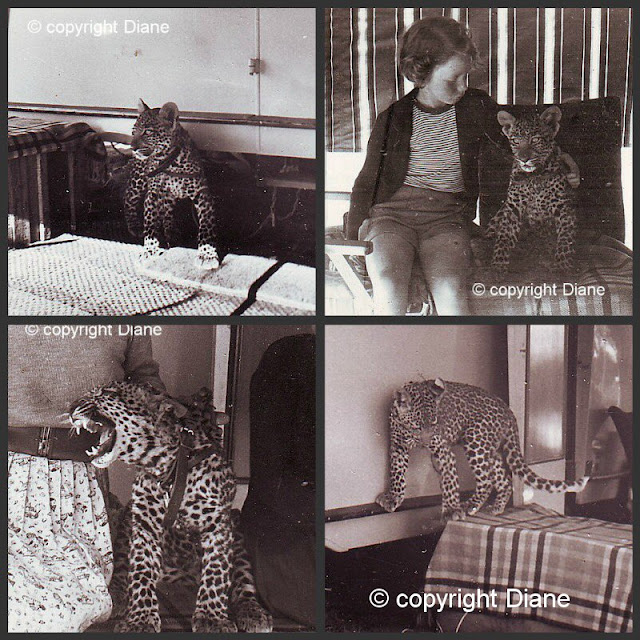 Felix growing up and showing that he did have big teeth!

After the arrival of Felix, as he was named, no one got very much sleep, as it seemed to be everlasting feeding time; but as he got bigger, it was just like having a large cat around.   We had been doing some house hunting so that I could move to a private school, but now if Felix was to become part of the household, it was imperative that we found somewhere larger than a caravan to live in.  In those days, there were no laws concerning the keeping of wild animals and we never had any problems where the authorities were concerned. 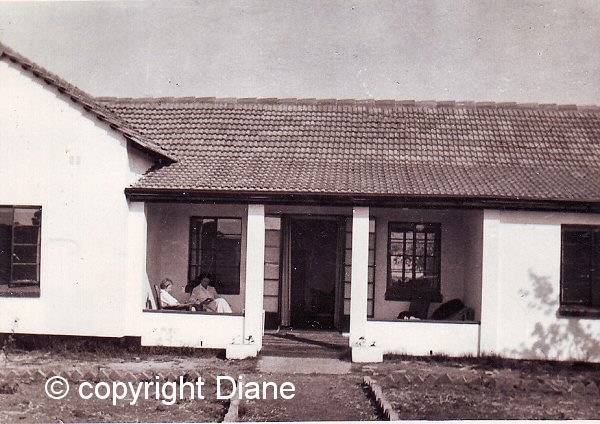 We finally found a very nice house set on a very large plot, in the suburb of Greendale, just outside Salisbury. We moved lock, stock and barrel with the caravan and although we stayed in the van for a short time while we were decorating and buying furniture, our lifestyle improved dramatically!  After completing one term at my first Rhodesian school, I moved to the local junior school, named after Courtney Selous, a famous Rhodesian explorer.  This was still a government school, but it was very up-market compared to where I had been!   Felix had a large ‘kennel’ built, where we could fit him with a harness and tether, so he was able to have some freedom outside. At the times we were at home, he was in fact just loose walking around the house. 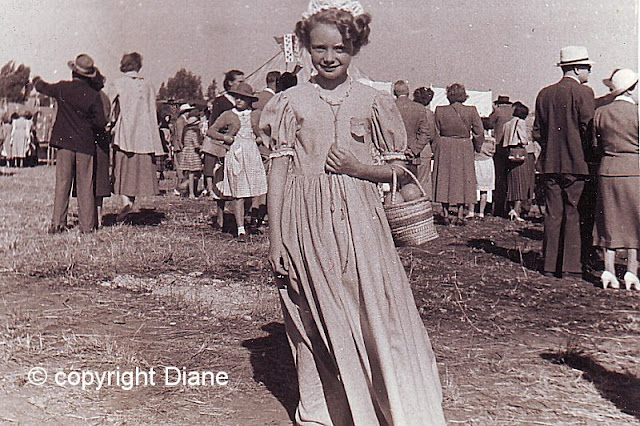 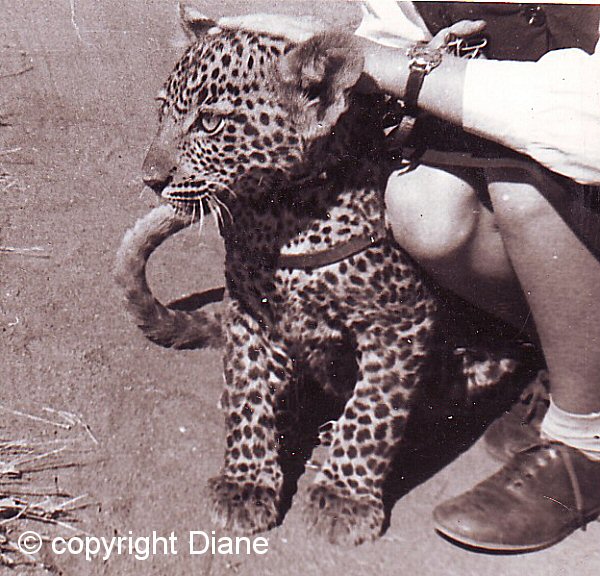 Felix when still quite small! 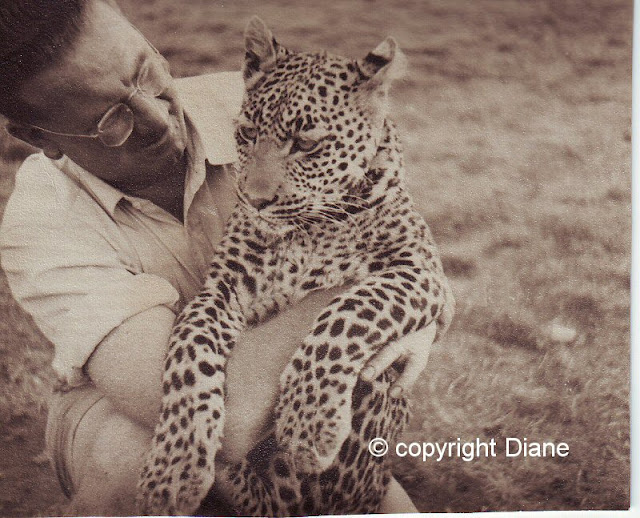 With my Dad, and  a little older

It was quite amusing when we had visitors, especially if they did not know there was a leopard at large.  We always made sure that the door was closed and when people arrived, invariably Felix would be out in the kitchen; this was where he used to spend a lot of time with Mum.   After he noticed that she had gone missing for a period of time, he would then go in search of her, invariably slinking quietly into the lounge, where he would jump up onto the nearest chair!  Unfortunately we never did get a picture of the frozen expressions we saw many times on the faces of unsuspecting people!   Felix loved my mother and she had a hard time cleaning the house, as a duster or a broom was only there to be played with!  Amazingly enough, there was very little damage done inside the house or to the furniture; I suspect that all the claw sharpening was done on a large log that lay by the side of his kennel. 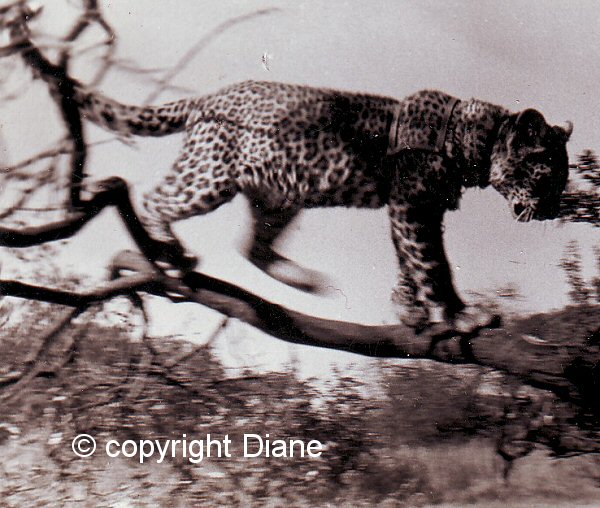 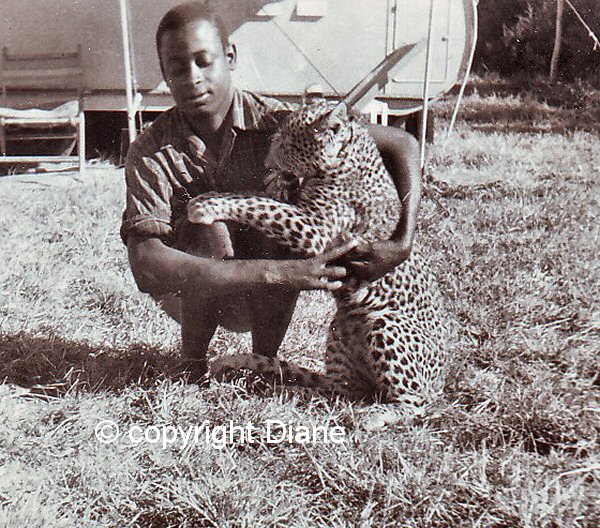 Getting a cuddle from our house servant, Tiki, who loved spending time with Felix.
We all suffered from his claws from time to time when the play got a bit rough, but never at any stage did any of us ever feel unsafe or in any danger from him.   Tragically, at the age of two and a half we had to have him put to sleep, having suffered a broken back.  We had been out and Felix had been at the kennel with the harness on.  There had been no reason to lock him up, as our African servant who loved Felix as his own, was on the property.   On our return, we found our servant sitting crying, next to the prone body of Felix. He told us that children from down the road had come on to our property and, finding a nearby pile of bricks, proceeded to throw them at Felix.   One brick obviously was thrown particularly hard, catching a vital spot and our Veterinary Surgeon who promptly called round, said that although he would have x-rays taken, he was certain that Felix would never walk again.    We were all broken hearted that such a lively animal should come to such a sad end.  It was many months before we could sit in the lounge without expecting a large cat to arrive on our laps.  Many tears were shed then, and for a long time afterwards.   As he had grown bigger, we had been prepared  for the time when we would have to make arrangements for Felix to be sent to a Wild Life Park or similar, but none of us had foreseen an outcome as sad as this. 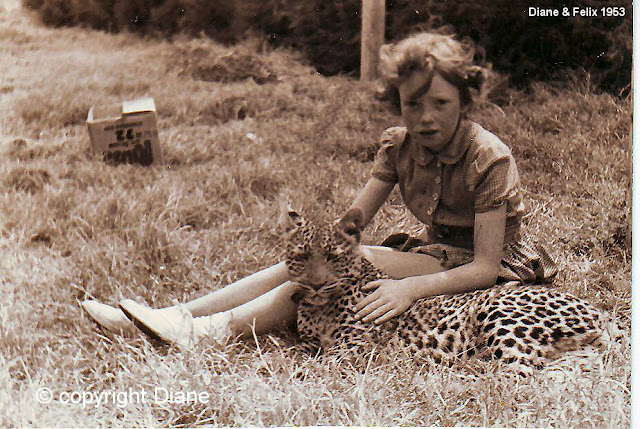