Arrival in Southern Rhodesia - at last!

What a pleasure to wake up inside a hotel and not have the inconvenience of rain and a wet Land Rover!   Breakfast cooked for us was total luxury after the last few days. We filled the tanks up with fuel once more and we were on the road again soon after 08h00. The road was a great improvement on the surfaces of recent days and we quite enjoyed the 82 mile trip  to Kapiri M'Poshi.

This was just a small railway station with a hotel, petrol and stores. We were there by mid-morning, but decided that we should top up again with fuel while we were able. Carrying on from there through Broken Hill, we had a lunch time break and drove onto Lusaka, the capital of Northern Rhodesia. We found a Land Rover agent there and Dad bought a new speedo cable, as ours was behaving in a very strange manner!   We had been told that we needed to report to Customs here, so maybe that was why the Ndola Customs officials were not interested in finding out who we were!   We had no problems and after leaving Lusaka, we saw our first snake on the road. We had no idea what kind it was, but so long as we were a safe distance from it, we did not really care too much. Although we were all used to snakes, when the species was unknown and the possibility of it being poisonous was quite a strong possibility, precaution was the order of the day!

We carried on to the small village of Kafue, where we filled up with fuel yet again and then up to the bank of the Kafue River, where we expected to find another ferry. Here we had a wonderful surprise - they had just completed a bridge across the river!   We carried on for some distance stopping at 17h30 in a quarry for the night. We lit a fire and had an enjoyable evening sitting by the fire having a chat, knowing that if all went well, we should arrive at our destination the very next day.

We were up at 06h00, feeling quite excited now that journey's end was in sight. We had a good tidy up and breakfast before we hit the road at 07h00. We arrived at the Northern/Southern Rhodesia border an hour later.
We passed very quickly through Customs and then Dad drove across the bridge, sited near Chirundu Gorge. Mum, David and I walked across the bridge with shouts of joy; we had at last arrived in Southern Rhodesia!! 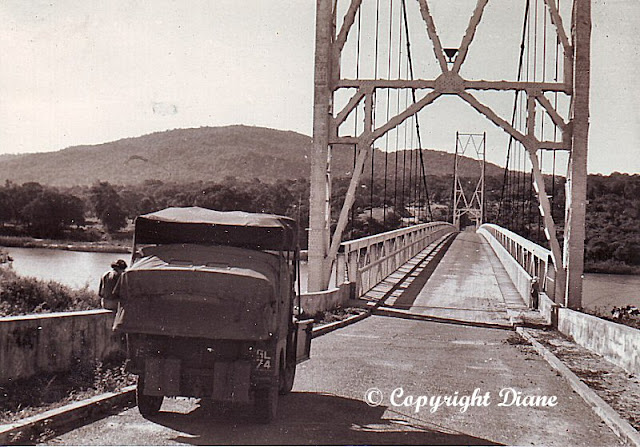 We went into the Customs and Immigration on the other side of the bridge and found we had more forms to fill in here, than at any other point of the journey!

We still had a day's drive ahead of us, so we were soon on our way again, passing through large valleys and thick vegetation. We kept our eyes on the road ahead, hoping that we were not going to come across another angry elephant!

We were then stopped by a guy with a net and a large fly spray; he sprayed out the vehicle before allowing us to proceed through a chamber and out the other side. We discovered later that this was to prevent the spread of the tsetse fly. There are 22 different species of tsetse fly, and they live only in Africa. These flies are slightly larger than a horsefly, breeding along rivers and streams. They are active during the day and both male and female feed exclusively on blood. The bite is extremely painful and very itchy.

Tsetse flies are an enormous health risk in parts of Africa. They can transmit a disease called trypanosomiasis, an infection of the central nervous system. Rhodesian trypanosomiasis, also known as nagana, is transmitted from animal to animal and mostly affects cattle, horses, and wild animals although humans can be infected. The Gambian form only affects humans and is commonly called sleeping sickness. The flies are hard to control, and tsetse fly infestation was at this time becoming more and more serious in Africa.  To the best of my knowledge, the problem is now mainly under control, but cases of  trypanosomiasis still appear from  time to time in Zimbabwe.

We stopped at noon for a short break and then carried on to the small town of Sinoia. Just after this we came across some young lads who had managed to drive their Morris Minor into a ditch. Dad brought out the tow rope and with the help of the winch, we soon had them happily on their way to the dance  they were going to. Hopefully, after the occupants had taken on a few drinks, the Morris Minor did not end up in the same predicament again!

We carried on through the villages of Banket and Darwendale, on what was called a strip road. This consisted of two continuous strips of tarmac, set  far enough apart to take the wheels of a car. Approaching vehicles each moved to one side for passing, so that the right hand wheels of each  car were set on the left hand strip and the left side wheels were in the dirt .   The arrangement was certainly a great improvement on what we had been driving on previously. On arriving at the suburbs of Salisbury along the Lomagundi Road, we found ourselves eventually on full tarmac. This was bliss!!    We pulled into the parking area outside the very posh Miekles Hotel at 17h15. Salisbury was the largest city in Southern Rhodesia and the capital. We had travelled 7736 miles without a single puncture, and thanks to my Dad's engineering background, all the other problems that we had encountered were easily solved.

Dad went off to book into the hotel, but came out with a very glum expression on his face. He had been told that there were no rooms available. A gentleman who was standing near the entrance of the hotel obviously had overheard us and asked what the problem was. We told him that we had just arrived having driven from the U.K. and we were in desperate need of a hotel for the night; did he have any ideas where we could go, as we needed a suite if possible?

He asked us how we would pay, and receiving our answer of traveller's cheques, he went into the hotel, returning after a short time to tell us a suite was arranged. We later discovered he was the manager, and that we had been turned away originally as they thought we looked so scruffy, that we would not be able to afford to stay there! By the time we had bathed and changed we looked a little more respectable when we came down to dinner. 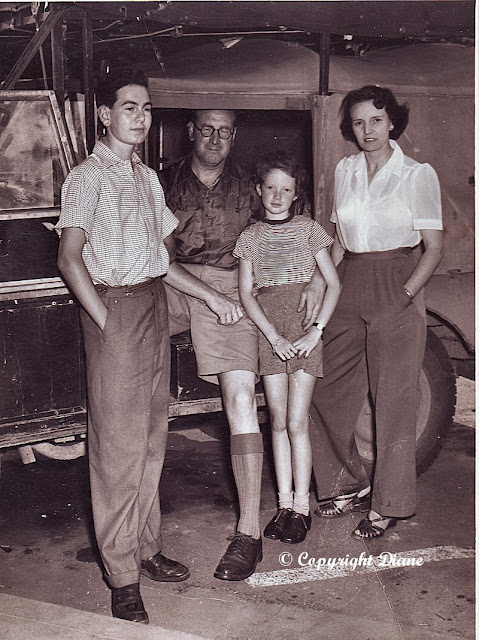 The photo that was taken the following day, published in both the Rhodesian Herald and the Bath Chronicle back in England.

The section of my life story during our overland trip is published on Kindle if you should be interested:-
See
http://www.amazon.co.uk/THE-GREAT-1953-TREK-ebook/dp/B008KK0KHU/ref=pd_ys_iyr1
Posted by Zimbabwe at 08:37