Out of the Congo and into Northern Rhodesia


It was still raining when we woke and impossible to do anything other than carry on driving!   The roads were diabolical and the vehicle was covered in mud. The side screens were impossible to see through, so Dad tried to wipe his side off with his right hand to see if he could improve his vision. This turned out to be a huge mistake, as we swerved slightly to the left and landed in a very deep ditch. We tried to push the vehicle out, but all we achieved was to get covered with a spray of mud!    There was not a soul in sight, which, due to the weather conditions, did not really surprise us. Dad got out the tow rope, tied one end to a tree and attached the other to the winch.


Thank heaven for Dad's mechanical engineering background and even then the addition of the winch back in Bath was a last minute thought!   It successfully did the trick and we were "back in business" again. We went only a little further before we stopped for a belated and much needed breakfast. At 09h15 we got under way again, as we wanted to move on as quickly as possible.  We were afraid that the rains would cause total havoc and we would find ourselves stranded in the Congo, with all the problems that would entail.

After a very stressful drive, we arrived at Jadotville (now called Likasi) at 11h30. It was quite a large mining town and the biggest settlement we had seen for some time. It was a pleasure to be back on a decent road again!   We stopped at a garage, to be told that the road we were intending to go on was very bad, so Dad decided that he should re-check the vehicle and make sure that everything was tightened up. We didn't think anything could be much worse than where we had come from, but perhaps we were wrong! We went to the hotel to have a good meal, as we were all a little tired of only being able to eat snacks. Cooking had been impossible for the past couple of days. We had a look around the shops until the Land Rover was ready and managed to buy some fresh stores to take with us. I was fascinated by some chocolate 'gold watches', some of which I was bought!     We resumed the route, to find the road was far better than many that we had already been on. The people, who thought that this was bad, should have tried some of the other roads we had driven on!

We kept going until 17h00 and after driving through a couple of small villages, we found a place to camp for the night and the rain by then had stopped.

An early start back on the road again, heading for Elisabethville (now Lubumbashi). We did not have far to go, but the road was very slippery and muddy. We drove into the town at 07h30 where we stopped to fill up the fuel tanks and then straight back on the route once more. We carried on until lunch time with the road fairly wet, but it certainly could have been far worse. We knew that we did not have far to go to reach the village of Sakania and the customs post into Northern Rhodesia (now Zambia), so while having our lunch break we had a good clean up as well. We arrived at the Customs at 13h10 where we had to have everything checked once more, including the guns and the cameras. We had no problems and by 14h30 we were driving on a pretty good road, arriving at Ndola in Northern Rhodesia in the middle of the afternoon. (Ndola is the third largest city in Zambia. It is the industrial and commercial centre of the Copperbelt, Zambia's copper-mining region, and capital of Copperbelt Province.) We reported to the Police and the Insurance Company and then went on to the Customs. The latter for some reason said they did not want to see us. We had a look around the town and decided that perhaps we should stay there the night, so we could have a good clean and tidy up. We managed to find the Rhodes Hotel and booked in there. We all wallowed in hot baths and felt very much better for it!   After dinner, David and I both opted for an early night, while Mum and Dad sat chatting in the lounge for a while to a couple of people we had met there earlier. 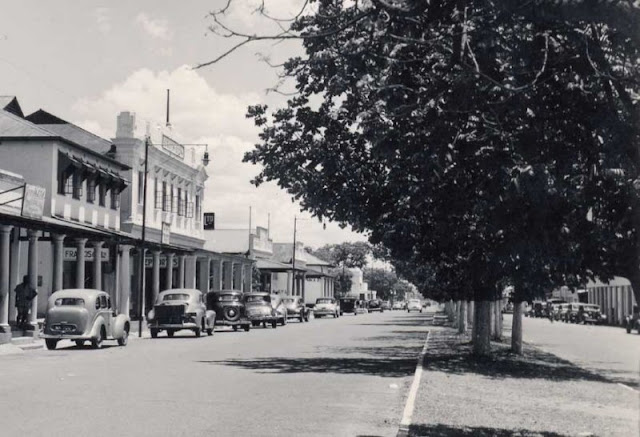 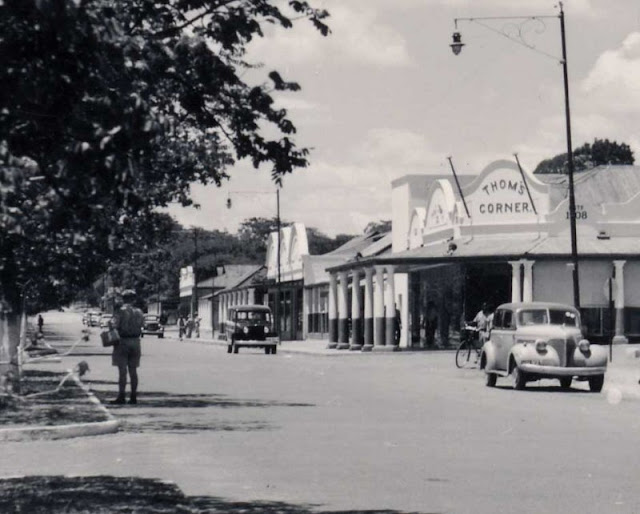 We do not seem to have taken photos in Ndola. The above photos   are from http://www.ndola.5u.com/custom2.html. The people who put up this site appear to be on a permanent sabbatical (their words), so if they should see these photos, I hope that they appreciate that I did try to get permission to reproduce them here!