Albertville and beyond - Congo

Back on the road at 07h00; it was now in very bad condition after the heavy rains and we had a slow drive into Albertville (renamed Kalemie in 1971), where we arrived at 10h00.    Here we drove a short distance on tarmac and we all thought that we were in heaven!  We picked up petrol while in Albertville and made enquiries about the best route to Manona.   We were told we would have to travel through Kapona, as this was the best road.   Leaving Albertville, we climbed rapidly again into very mountainous country with thick jungle and while up at the highest peak, a huge storm suddenly broke overhead!   The crash of thunder made us all jump out of our seats, as it was so sudden, and within seconds we were soaked through, as the side window sections had been repacked on the roof!   It was pointless trying to get them and put them on, and none of us could have got any wetter anyway.    We found a place to stop at 13h00 when the rain had stopped, cleared an area and managed to get a fire going with all the wet wood.   We did not take that long to dry out and the Land Rover, after getting rid of the worst of the water, also dried very quickly.    We had some soup to warm our insides and then we were on our way once more.

We drove on over more hills with thick bush on each side; it was all very beautiful, but there was a dark grey sky overhead and the clouds appeared to be building up all the time.   We did not fancy getting another soaking and when at 16h30 we arrived at Kapona, which was not a very big place, we  topped up with petrol, before eventually stopping beyond it to make camp for the night.   We all slept remarkably well after the difficult day behind us!

We woke up to a clear blue sky, with the sun beating down!   Happily, all our camping equipment was drying out rapidly and we were on the move by 07h00.  It was still thick jungle country and at 10h00, we came across another ferry which we had to use.    This was the best ferry we had seen and certainly the safest looking!  The river was very wide and the surrounding countryside was lovely.   After a safe trip across the river, we pushed on until mid-day, when we stopped for a break and a snack.   We were at last learning; this was the time of the day to stop, so that we would only arrive at Manona after 14h00, when hopefully the petrol station would be open!
Finally we decided it was time to move on after our snack stop, and we found Manona to be an incredibly pretty village.    Here we really had a major language problem and in trying to find the petrol station, we were sent to various places, including a tin mine!   One hour later, we found someone who  could understand what we were after and directed us to the petrol station.    Meanwhile the clouds were gathering once more and we decided that perhaps this was the right time to put the windows back in!    On leaving Manona, we had not gone far when the rain started again, but this time we missed the centre of the storm and with the windows in, we drove on in 'dry ' conditions!

At 17h00 we found a suitable place to make camp and after a hot meal, we decided that an early night would be the order of the day. We had not travelled very far today, less than 200 miles, and the strain of driving and concentration was catching up on Dad.

We awoke early, but the rain was pouring down!    We stayed in the Land Rover until 08h00 and then decided to drive off and try to stop a bit further along the route, to tidy up and have breakfast.   The rain had stopped at 09h15, so we stopped while we could!    As soon as possible, we were on our way again and we drove through some spectacular countryside.   There were some beautiful gorges and incredible waterfalls, but unfortunately it was too misty to take much in the way of photographs.  You can see, though, in these following shots, just how much water there was in the small rivers! 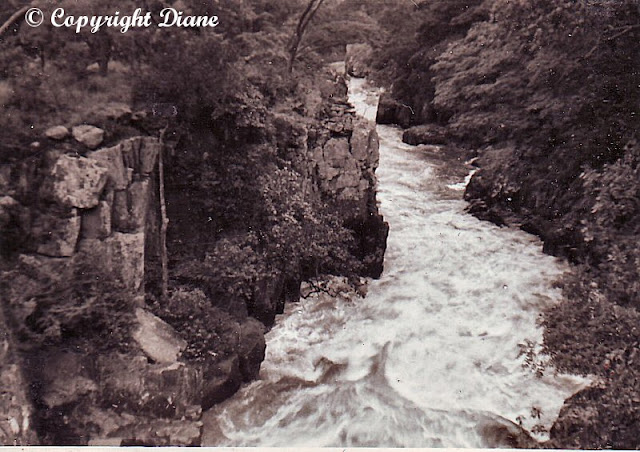 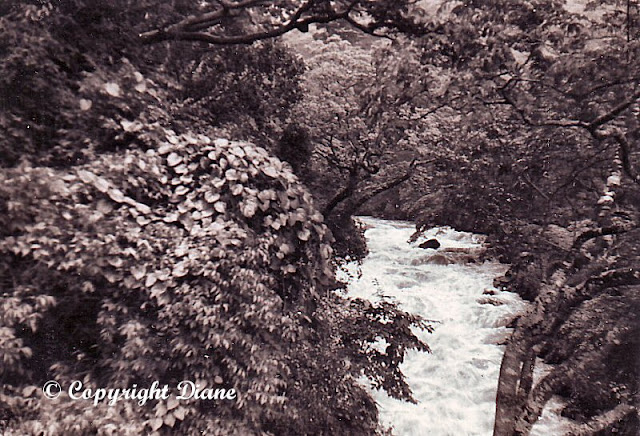 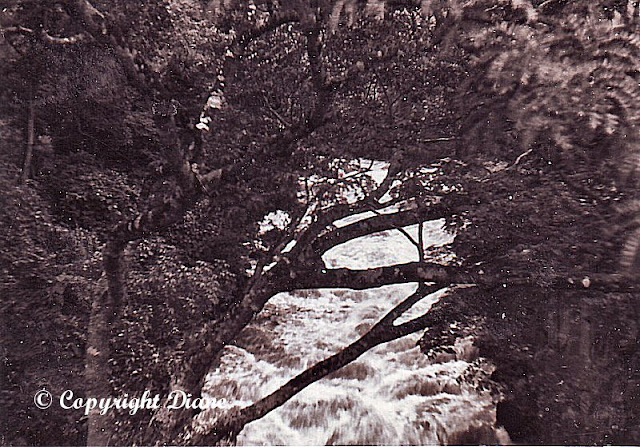 The road then started climbing again and the scenery reminded us of the passes in Switzerland, minus the snow on top!    At 12h15, we stopped again at an eye-catching, but small, waterfall.  The sun had  come out by this time, so we had a good tidy up, did some washing, had a meal and left again for Mitwaba at 13h30.   On arrival, we found it to be another tin-mining town and we had the same language problem as before!     We had trouble finding the hotel, where we had been told we could buy petrol.    After doing a tour of most of the town before we finally found it, we were told that there was nobody there who could fill up the Land Rover's tanks until 15h00.   Meanwhile, the rain started again and during the downpour, the hotel proprietor drove up. He said that he had intended going to a town some miles away.   Due to the weather conditions and the roads being so bad, he had abandoned the idea.    This was a lucky break for us; if he had done the intended trip, he said he probably would not have been back until about 19h00.

The road after Mitwaba was atrocious; we had hoped to see the Kubo Falls, but due to the conditions and the rain, this proved to be impossible.    At 17h30, we had to cross a small river by ferry only, to find the road on the other side was completely under water!  Dad drove on steadily, not knowing the depth of the water and wondering where the next pothole would be that we might disappear into!   After a gruelling 30 mile drive, the road climbed upwards out of the river valley and we were at last out of the swirling floods, although it was still very wet.   At times, the water had been over the axles and being so black and dirty, it was impossible to know what it might have concealed!  We finally managed to find a place where we could stop, but it was impossible to get out and walk anywhere.   Apart from the mud and water, we had no idea what creatures may be close by and we were particularly worried about poisonous snakes!