Travelling Through France to Marseilles

January 25 1953    Land Mileage 0283
After a good night’s sleep and a hearty breakfast, we packed up and eventually got under way again at 10h00.   It was a very cold and chilly day; thank goodness we had a heater!  We drove on until we reached a small village where we had a quick stop over, and then onwards to Lyon and a hotel stop for the night.  The city is known for its historical and architectural landmarks and the Basilica of Notre-Dame de Fourvière on the hill is a UNESCO World Heritage Site.  It was a pretty uneventful day in all, the vehicle was going well and David and I loved every minute of it.   We found the pack of cards which kept everyone amused until dinner time.   I think that we used to play rummy, but not having played cards for many years, the skill has now been lost!!  Nowadays of course, I would have been out running around with the camera and blogging!!

We woke up very early and ordered breakfast to be served in the bedrooms.   There would not be much luxury from here on, so we decided to spoil ourselves while we could.   We had eggs and bacon around 08h00; what could we have been thinking of?   English breakfast in France!   We packed up again and left Lyon around 09h30.
Snow and ice were the order of the day; this was exactly what we had been afraid of; so the progress south became even slower.  We sat in the Land Rover like four Eskimos, all huddled up in our coats, with the heater on full blast. Upon our arrival in Montélimar (famous for nougat and its lavender fields) we decided that we should try to find a shop and get some cheese and fruit.   Numerous shops sold nougat, but it took us quite some time to find our requirements.  Having done our shopping, we drove through the very picturesque town and stopped on the other side to have our snack.   We managed to find a spot by the edge of a field that had some shelter from the very icy wind, which was still bearing down on us.   It was very cold, but we felt that we really needed to stretch our legs, so we braved the elements to go for a short walk.
After all the exercise, we huddled back into the Land Rover, heater on, and proceeded on to Marseilles where we arrived at around 16h30.  Marseilles is the oldest city in France and the second largest, after Paris.
The hunt was then on for an hotel which we found just off the square.   Routine took over and the usual, unpacking, a bath and a cleanup before strolling around the streets window shopping.   The weather was definitely warmer here, for which we were more than grateful.   We found ourselves a nice little cafe and dare I say it, had a very English dinner before retiring for the night.   That is, all but David, who was intrigued by the sights of Marseilles and he went off on his own to have a look around.

January 27 1953      Land Mileage 0716
After a good and restful night's sleep we decided to have a French breakfast, which was light and thoroughly enjoyed by all of us.

We were not particularly hungry and I was not really feeling well.   We had planned to stay in Marseilles for a day or two, so we left the Hotel to go to the Maritime office to check to see if all the papers and tickets were in order for the Mediterranean crossing to Algiers.   This process indicated that all was exactly as it should be.   We had a look around the docks and by the time we decided that we should go back to the hotel, I was feeling really ill.   Mum insisted that I lie down on our return, which I was more than happy to do.  By now it was lunch time (our days seem to be made up of eating!) and Mum, Dad and David went off for a quick meal, leaving me to have a sleep.
Later the weather had improved and it was decided that perhaps fresh air would solve my problem.   We found a taxi and off we went to the Zoo.    Not the most exciting trip we had ever done, but the sun was shining and we were fascinated by a chimp who was smoking a cigarette.   Looking back it seems cruel that people could tempt a chimp into such bad habits, as I am sure that the end result would have been anything but good for him.   On our return to the hotel, I certainly seemed to have improved.   Dad went out with David to buy a chain and padlock to lock up some of the items in the Land Rover.   We were worried what might go missing while the vehicle was in transit to the North coast of Africa.
Mum wrote some post cards to let everyone know back home how we were getting on and then we played cards again until bedtime.   My mother slept in my room that night in case I took a turn for the worse, but I certainly seemed to be rapidly improving from whatever had set me back during the day.

January 28 1953
The weather had improved again, so after breakfast we went for a walk around the docks and the quay. 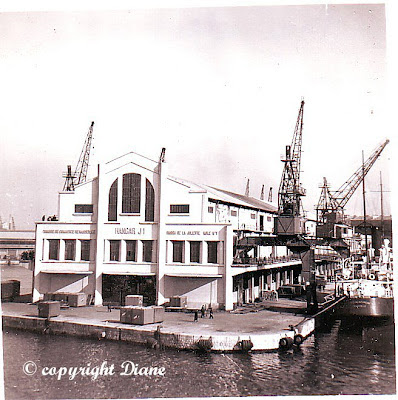 It was quite an experience to watch the loading and unloading going on and it left us in little doubt as to what was going to happen next in our lives. 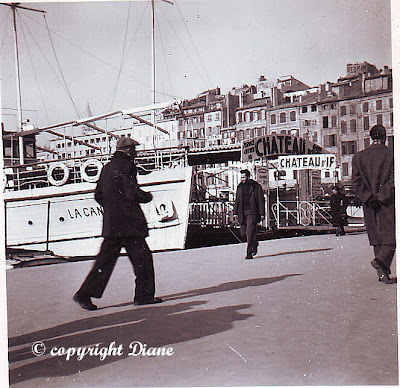 In the early part of the afternoon, we had to take the vehicle to the Gare Maritime so we packed everything up that was necessary and then locked up as much as we could.   The port officials wanted to siphon out petrol from the tanks for safety reasons, but to their disappointment, we had worked out almost exactly what would be required and there was nothing to remove!   We then took the vehicle down to the boat and watched it being loaded.    It was put on by crane and this took some while, with much shouting, pushing and swinging (to us, somewhat precariously) around.    In the end it went up and over and was put down into the hold.
We then celebrated this event with a bottle of cherry brandy, which we bought for six shillings; very expensive at the time!    Even I was allowed a very small glass! This went down well with some ham and fruit and we then went back to the hotel; there it was decided that I had better have an early night, although I seemed to have fully recovered from whatever had upset me the previous day.