January 24 1953 Land Mileage 0064
We docked at Le Havre, where the Land Rover was unloaded with much grunting and groaning; the vehicle was pronounced "too heavy"! 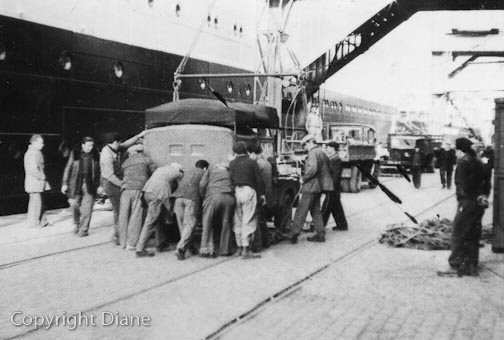 We then proceded to Customs; this was at 05h30, and our troubles were already beginning! We were not feeling too bright at that early hour and Customs wanted to see  permits for us to travel with guns.  Mum and Dad were both carrying guns and David and I had a large sheath knife each in case of trouble.  As we had been told previously that no papers were required, we had nothing to show them! The Customs people then took us off to the Police, who in turn took us to the AA.  We were all starting to wake up by then and Dad explained that the French Consulate in London said that no papers were required, as long as the guns were declared. Finally it was decided that we definitely had to have permits.   Naturally, as Mum and Dad had spent a whole day in London visiting consulates making sure that all papers were in order, they were not amused.   The whole morning was spent in the office asking the AA to phone London, but the more we argued, the worse the matter became.

It was a case of the AA phoning the Police, the police phoning the Customs in Le Havre and the Customs phoning back to the AA.   What a wonderful start to our trip, no wonder the last people to do the journey were never seen or heard of again!! We had visions of the adventure ending before it started; meanwhile, our caravan was on its way to Rhodesia.   Lunch time arrived and we all refused to move anywhere, but of course it was 'time out' for everyone else concerned. Lunch is a very important meal in France and the country almost comes to a standstill for two hours.   In a final panic, the phone calls started again and the Customs agreed to sign Dad’s passport to the effect that we were carrying guns and to let us pass.   With a sigh of utter relief, but wondering in our hearts how many more setbacks were ahead of us, we set out southwards from Le Havre.

Having crossed the Channel with near empty fuel tanks because of weight, we stopped about 14 miles out of town for petrol.   David, in his best French, asked for 90 litres of petrol and the petrol attendant thought he was a nut case.  Who ever heard of a Land Rover that could take 90 litres of fuel?   With much hand waving at the extra tank and proving that we had enough money to pay for it, we finally received our 90 litres.   The attendant took the cash and next thing  the manager was outside, peering at the pump in disbelief.   We really should have had the camera at the ready; the expressions on those two French faces were well worth a photo.   They must have thought we were very rude, as we all collapsed laughing.   How times have changed! That 90 litres cost us the equivalent of seven British pounds!

After a fairly easy, but slow drive we stopped at Senlis and found a hotel for the night.   After the early start from the ferry and the drama over the firearms, we were all totally exhausted.   Senlis is a medieval town in the department of Oise.  It has many historical monuments and a Gothic cathedral.  One day I would like to return to see Senlis, as it has masses of history.  Meanwhile if you are interested in the town take a look HERE.  I remember walking around with Mum and Dad, and David went exploring on his own; sadly we do not seem to have taken any photos.