We had a lazy morning (for us) in bed, only getting up at 08h00!   We packed up our overnight cases, paid our bill and caught a taxi down to the boat. We passed through Customs and then sat in the 'waiting room' until 10h45. Suddenly, everyone in the room made a dash to the boat, so we decided that maybe it would not be a good idea to get left behind!    There must have been some hidden signal that we did not know about! It was a lovely ship and when we boarded, we were taken to our cabins where we quickly dropped our cases, so we could go up onto the deck to watch the tugs pulling us out to sea. 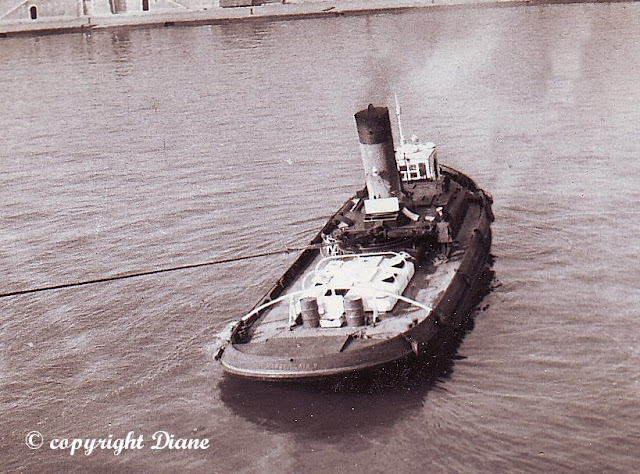 Looking across to the land, we could see the famous Château D'If on our left. The chateau, whose first stone was laid in 1516 by King Francois 1 and finished in 1529, was built as a fortress to guard the port of Marseilles. It is built on a rocky island in the Mediterranean and in 1634 the chateau was used as a detention centre for political prisoners. It is now mainly a tourist attraction and the island is uninhabited. The chateau was made famous by the French writer Alexandre Dumas, in his 19th century novel, The Count of Monte Cristo.

The weather was definitely much warmer than we had encountered in the last few days, and we knew now that we had to be heading for the sunny coasts of North Africa! We had no idea if meals were included in the fare, but after having made our way out to sea, we decided that the dining room was a good place to visit next. Regardless of the hole it might make in our travel budget, we sat down at 12h15 to what was a sumptuous lunch. We ate solidly until 14h00 and the meal included everything one could think of, from cold meats to lobster and coffee to red and white wine. Mum had visions of Dad, who had been an engineer in the Merchant Navy, having to take on a job to pay for the feast, while the rest of us might have to take on the washing up for several trips - what a thought! No bill was forthcoming when we left the dining room, so we thought rightly that all meals were inclusive. Feeling extremely full, we went down to the cabin and unpacked the necessities, including the pack of cards and had a very lazy afternoon in the lounge. At 16h00 we were served tea and cakes, after which we decided that a walk was really necessary before the Land Rover collapsed under all the extra weight it was going to have to carry!    At 19h00 the gong was rung to say dinner was ready! I think that we must have been worried about starving for the next few weeks, as off we went and spent an hour and a quarter on a five course meal.

We then went for another stroll around the deck, as none of us could have possibly slept, having over-eaten during the course of the day. We suddenly realised that we needed to put our watches back another hour, having already had one time change in France. 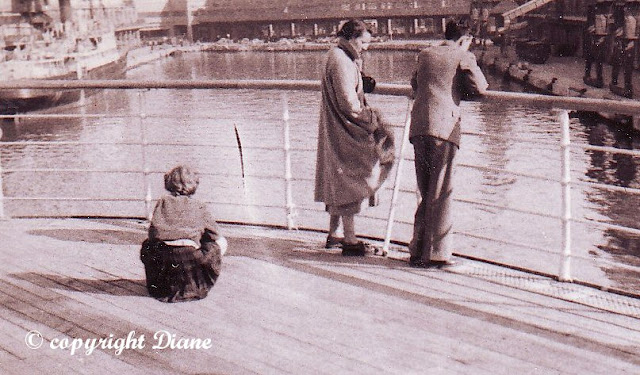 I went off to bed, while the others went to see what was happening in the lounge. Apparently everyone there seemed to be playing some sort of game,
but it looked far too strenuous and as they knew there was an early start ahead of us the following morning, it was decided that discretion was the better part of valour, and they all came down to join me in the cabin.

We had a wake-up call at 05h30. We did the necessary chores, and dare I say it, we went off to the dining room for breakfast!   We docked at 06h30 when 'swarms' of Arabs came aboard to carry off luggage etc. For this we were very grateful. Not only did they carry everything for us, but we suddenly became part of the 'family' and went through Customs at great speed, only waving our British passports under the noses of the Customs officers!    We were on North African soil and the adventure was about to begin!

Dad went off with one of the Arab porters, while the three of us sat and waited for the Land Rover to be offloaded. We were busy watching all the hustle and bustle of the docks, when we saw that the offloading was beginning, with a few cars. Sometime later, we saw the Land Rover in the air and next thing, that was also ashore. There was a lot to do before we were on our way again, meanwhile the three of us got a taxi and went off to the hotel. Having stayed at the same hotel in 1951 when I had decided I wanted to holiday in Africa, we knew what to expect. Everyone seemed very pleased to see us again and all the same staff were still at the hotel. Dad meanwhile was trying to make sure that we had all the necessary permits, including ones for the guns.

It was a beautiful day and we knew that we were definitely under an African sky. The sun shone down and the sky was a cloudless blue!   What a difference from the chilly England of a few days earlier, and the snowy roads that we encountered in France. We walked through the beautiful gardens with their waving palm trees, and marvelled at such a day for the end of January. Time to pack the duffel coats away!   We wondered what the weather was like in England and felt sure that everyone would still be freezing over there. Dad returned to the hotel and then went off to the A.A. office, which was close by. He discovered that we could do nothing until Monday, as we had to get a signature on a document to present to the S.A.T.T. (Société Africaine des Transports Tropicaux).