My Brother David, the Dancer and a Big Mouth!

David, my half-brother, was seven years older than me, and perhaps because of the age difference, we got on very well together. I never remember a bad word between us and he was always there for me when I needed him.  He was the greatest brother any girl would ever want to have and I have wonderful memories of times together when I was small.
A story that stands out clearly in my mind is from a day when Mum and I had returned home from Fiveways garage one chilly winter day, to find the house covered in damp and soggy towels.  David luckily had been at home and had noticed Tony and Bridget's litter of six St Bernard pups playing down the garden.  They had discovered what fun it was to try sliding over the fish pool, only to find the ice was not strong enough to hold all of them!  David was chilled to the bone, but he had managed to wade in and recover all six of them and get them up to the house.  He wrapped each cold and wriggling puppy up in a towel and lit the fire.  The next day they were none the worse for their experience and a few weeks later, all left to go to their new homes. 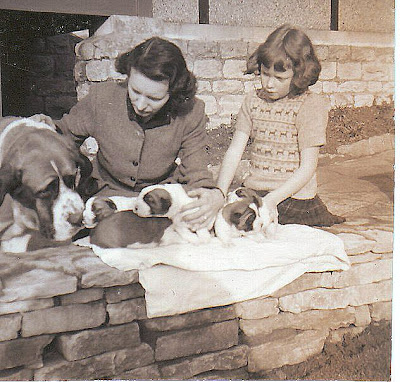 When I was three, I started tap dancing lessons. I have memories one Christmas of being on stage at the dancing school and being in a Christmas cracker.  When the cracker was pulled, I jumped out and danced a solo.  Apart from being one of the three witches in Macbeth during my time at senior school with the lines “Double, double, toil and trouble, Fire burn and cauldron bubble”, that was as far as my stage career ever went.
I am not quite sure  how old I was at the time, but another story that I was never allowed to forget, even long after I was  married, was the day I got on the a bus with my mother and I looked up and said in a very clear voice “Oh look Mummy, hasn’t that lady got a funny face”!!  I recall that my mum, with a very red face, told me to be quiet and sat with me as far away as possible, but a lady behind her tapped her on the shoulder and said “Really, the child is quite correct my dear”.   My poor Mum must have been so embarrassed, but as they say ‘out of the mouth of babes’.  She did admit to me in later years that the woman looked very like a Pekingese.

I suspect my mother had a tough time with me and my big mouth, as  I was reminded a number of times over the years of the day that relations arrived with their two small children.  The children had been brought up being allowed to do what they liked and were never told off.  On this particular day, they decided upon arrival that it would be great fun to jump up and down on the settee in our lounge.  The only person there who was willing to tell them off was myself, and I told them in no uncertain terms, that feet were not allowed on the furniture!

The relations gathered up their children and left in a big huff; it was many years before they spoke to my parents again.  My mother did receive a phone call from another member of the family saying that her sister had phoned and told her the story of the children.  I gather everyone was delighted that the children had been put in their place for once.  I may have caused a family upheaval but it seems that I did in fact say the right thing! I have to admit here that I never met up with the children again, until about 6 years ago.  Nothing was ever mentioned and hopefully they have not remembered the occasion!
David and I used to have a lot of fun together and on one occasion my Mum came looking for us, as we appeared to be particularly quiet.  To this day, I have never discovered how we kept our playful sounds down, but when Mum discovered us in the lounge, she walked into a room full of floating white feathers!  We had discovered the fun of having a pillow fight with feathered pillows; my only comment was “Look Mum, it is snowing”.  We were very unpopular on this occasion and in lots of trouble, but David pushed me behind his back and took the blame for it all.
I have very few photos of a young David; the photos of myself in the blog are not precisely in date order, so please forgive for that!
Posted by Diane at 04:00