Here are a few family stories, not related precisely to the chronology of the first, and future, blogs!!

My maternal grandparents, Les and Kate, lived in Brunswick Street on the eastern outskirts of the city centre of Bath.  While visiting them one day, my grandmother asked me to throw out some crumbs for the birds.  I did exactly what was asked to, but unfortunately not only did the crumbs get thrown into the garden, but the plate followed them as well! I was not popular! I suspect that it was not a plate from her best dinner service, though over the years I have often wondered.  Too embarrassed to talk about the episode afterwards, I never did find out the answer! 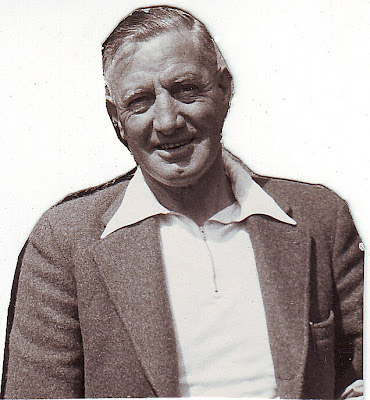 My grandfather Les; the only photo that I can find is this cut out

My father Don meanwhile, was also up to all sorts of nonsense, and he loved practical jokes and pranks.  Two stories stand out most in my mind.  Dad was always being pulled over by the local police for one thing and another; speeding was the main problem.  This was sixty-odd years ago, with not too many cars on the roads and long before the days of radar and other modern technology. The police officer's judgement would have been the only evidence! Dad could never drive slowly in his early years and often raced around on a motorbike with sidecar. He often took part in rallies  on the machine, with one of the mechanics from the garage navigating from the sidecar!!  On the particular occasion  I am thinking of, he was driving a large Buick, registration number FLP117.  He was at the local pub with some mates, when another friend arrived and said "watch out Don, the local police are on the main London Road near the garage and you are sure to get stopped if you put a foot wrong!!".  Dad then suggested that they should swop cars and he would go home first and the friend would follow in Dad’s car.  Dad duly drove home and, keeping to the speed limit, sailed through the police check with no problem.  The friend, also keeping to the speed limit got stopped and was questioned closely as to why he was driving my father's car.  “Oh, we just decided to swop over tonight" was his reply. "Don went home some time ago.”  The friend was duly sent on his way, as they had no reason to detain him further. I am sure that if Dad had been driving, the police would have found some infringement of the law to accuse him of!
Another story related to a young gentleman customer with a chauffeur-driven Bentley, who used to come into the garage on a regular basis.  He was a Lord something, but I forget his name now, which is probably just as well under the circumstances!!  On the day in question, somebody came into the garage for petrol and on his way there, he had run over a fox.  Not wanting to leave it in the road, he picked it up and asked my Dad if he could dispose of it for him.  Quite soon after, the Bentley came in for a job to be done and the car was left there for the day.  The two mechanics were brothers, Tom and Jake, and after they had finished working on the car, the pair of them and my father thought it would be a great joke to wire the fox  under the car!  This they duly did, and when the chauffeur collected the car, he was totally unaware of what had happened.  It was only several days later, when both the lord and his chauffeur turned up and they commented what a terrible smell was coming from their garage.  They thought that maybe it was the drains, but the terrible part was the smell had got into the car and they could not get rid of it!  A couple of days later, the poor chauffeur saw a string of maggots on the garage floor and it was only then that they discovered the cause of the smell!   The poor man was told by his employer to get under the car and remove the remains of the fox!  Next time they went to the garage, Dad was told the story and they said they could not think how or when it could have happened. Dad, Tom and Jake looked sadly on, shaking their heads, saying what a terrible thing to have happened.  I would imagine when the car drove off, they all collapsed in laughter.  I suspect everyone involved in this terrible joke have now all passed on but, if the chauffeur is still alive and reads this story, then I can only apologise for my father’s  behaviour and sense of humour!
Posted by Diane at 08:29