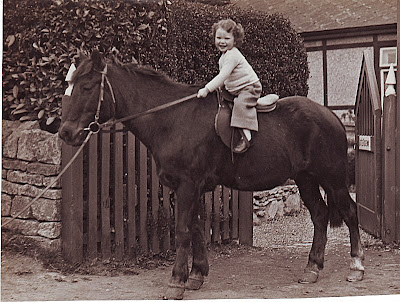 I started my riding days early! Here I am aged 3 on my pony Meggy
I have only a few memories of my very young years.  I try  to  recall those times, but as I get older, the  process becomes more difficult!  After the war, my father who was an engineer, worked for a spell  at the Royal Air Force base in Colerne, a village about 10 miles east of Bath, Somerset. He wasn't there that long, as I remember, and he soon took over the running of Fiveways Garage, a petrol and service station in Batheaston, a suburb of Bath and on the  London Road just outside  the city.   The business was owned by my paternal grandparents Walter and Alexandra and at that time, in the early 1950's, in a good position to attract  passing motorists on the busy route to the capital.


Having driven past the garage site much more recently, I see that many things have changed; the old buildings have been completely demolished and a car showroom stands in its place. In the last 60 years, with the preference for motorway travel, the old, once busy main road to London, is now used for local travel only. With no passing trade, the petrol sales and service business became unecomonic. 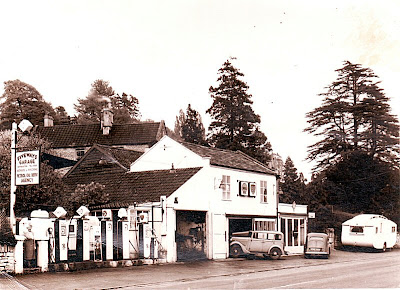 Fiveways Garage -  London Road, Bath - about 1950
With my Dad's job at the garage now established, the family bought a house in Morris Lane, just around the corner from the garage.  It was a large and beautiful property  and my parents had the garden landscaped to include a small bridge over a fish pool at the back of the house. We had kennels under the back of the house where my Mum had a pair of St Bernard dogs, Bridget and Tony. I had a little Scottie dog called Judy, truly the large and the small of it! We also had a couple of stables in a field at the back of the house; my father owned a 17.2 hands high grey Irish hunter called Colonel Grey, while I had a small pony called Meggy, which the reader will have seen above. The pony was shared between David, my half-brother from my mother’s former marriage, and me, but he was never really that much interested in horses. My mother could ride, but never took it seriously. This introduction to horses and riding became a sport which assumed much greater importance for Dad and myself in later years. 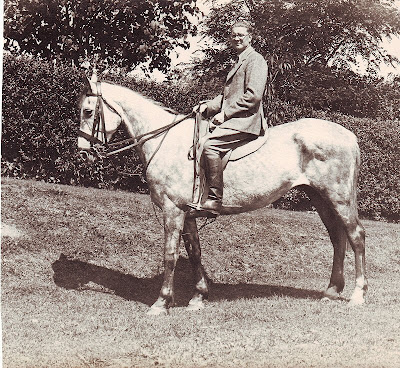 Dad on Colonel Grey
Colonel Grey was a beautiful animal, but he had a very odd temperament and only my Dad ever had anything to do with him. If any of the rest of the family went near him, he adopted an "ears flat and teeth bared" attitude; thus I learnt at a very early age to have respect for not only an animal that I did not know, but in this case, one that I did know.

One of my father’s best stories related to a time when he was asked ride Colonel Grey at the head of a fancy dress parade in the city of Bath.  Dad got all dressed up and went down to fetch Colonel Grey, who, presumably not recognising him, would not let him into the stable!  The end result was that he had to remove part of the fancy dress, mount Colonel Grey and then get redressed while on his back.

At another time, I also had the privilege of being in a parade in Bath, riding Meggy and wearing a drummer-girl outfit with a top hat and tassel on my head. How proud I was of the outfit at the time! 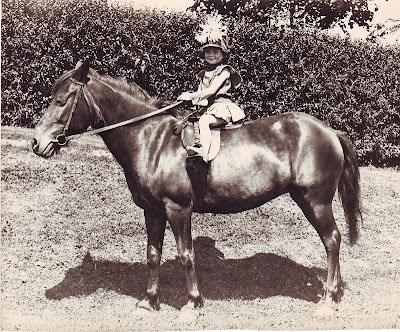