Dad's fibreglass car and my first pony in Rhodesia. Still in the 1950's!

At the time of moving house, Dad had ordered a fibreglass car body from the UK. I think that the original plan was to build it up for use in the local car club driving events, but as far as I remember, this  never materialised!  The car was built with a Morris Minor engine, and when the weather was good, Mum would use it most of the time. It had an open cockpit, with no doors and I remember her always having to wear slacks when driving it!   One of the stories about this car that is vivid in my mind was when Mum was shopping one day; a school kid asked Mum what kind of car it was. She replied “it’s a Morris Minor”, so the friend with him responded  “ask a silly question and you  get a silly answer”!


Soon after the house move, we had a stable and tack room built and then the search was on for a pony for me. By this time, my Dad was selling tractors and a lot of his time was spent travelling to farms in different areas. He had gone to a farm in Umwukwes, where the farmer was a keen polo player.  Dad asked if the farmer knew of any ponies for sale and the farmer replied that he had one that might be ideal for my purposes. It had been bred on the farm and although he had high hopes that one day the pony would be part of his polo team, Dusky, as the pony was called, did not have the heart for the game. So long as he did not have to ‘push off’ another horse, which is required in the game of polo, he could do everything else that was required; however, the game is tough and he lacked some of the heart and power to push the horse playing next to him out of the way.


The very next day I rode over to Lewisham Riding School to show Dusky off. I was so proud of him and everyone appeared to be duly impressed. It was of course going to be a long time before I was riding him in competition, as he still had to learn how to jump and nip around quickly in the gymkhana events. During the week I still rode the school ponies in class, but at the weekends I took Dusky to Lewisham where everyone helped me with his education. He was a quick learner and seemed to relish the fun of gymkhana events which involved lots of quick twisting and turning.

He was very strong, and at times it was all I could do to keep him under control. Jumping came more slowly to him and he did not seem to show too much enthusiasm; but when I took him on his first paper chase, he loved every minute of ‘running with the hounds’.

The Right Honourable John Long owned a pack of hounds and "paper chasing" became particularly popular in Rhodesia, where of course there were no foxes! Paper chases take place on a route laid out by a member of the hunt and he rides from starting point to the finish, dragging behind his horse, a sack carrying the scent that the hounds will follow. These events were also a magical training facility for young horses, as they socialised and learnt the manners needed in a crowd. I think that the horses enjoyed their day out as much, if not more, than their owners!
This first event seemed to inspire Dusky's jumping and from there on, he went from strength to strength. We used to ‘hunt’ a couple of times a month. 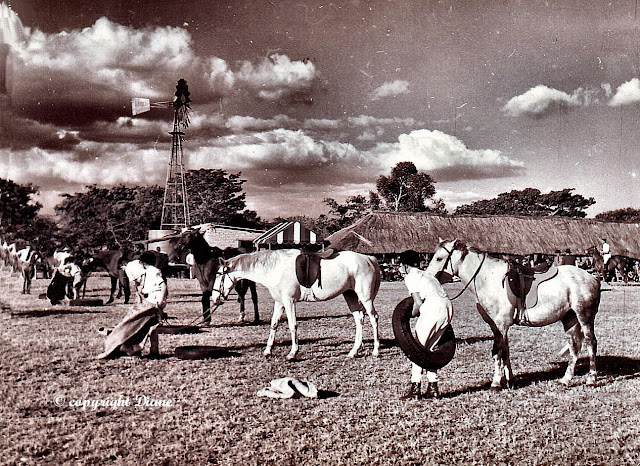 Above and below, photos of me from  previous years, riding the grey pony called Prince Charming at a gymkhana. 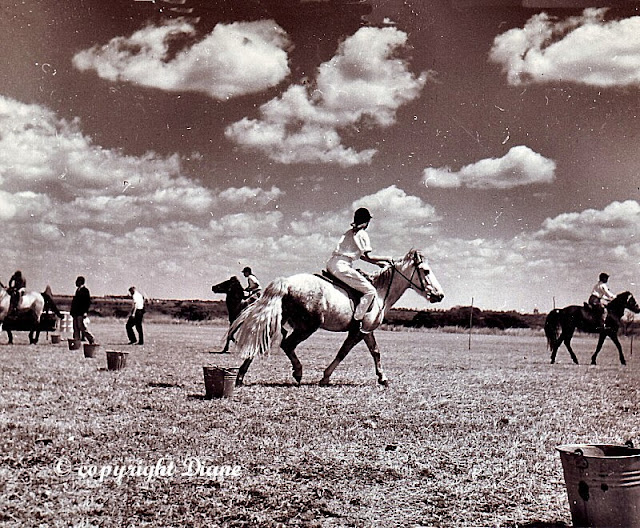 The section of my life story during our overland trip is published on Kindle if you should be interested:-
See HERE