After our exotic holiday to France and North Africa, normal life at home in England resumed, although I was still not allowed to participate in most sport.   Normality did not last for very long, however, as in March 1952 my mother read a newspaper article about George Hinchcliffe, a Yorkshire motor dealer; he had just broken a record for driving from Cape Town to London in what Mum always said was a Vauxhall, but the internet photos show it to be a Hillman Minx!!   Her casual remark to my father saying "wouldn’t that be an interesting trip?" was taken seriously, and after some discussion, the wheels were literally put into motion!! 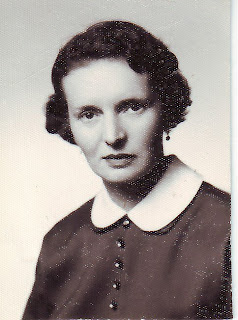 Mum
The African country of Southern Rhodesia came into my parents' mind as a destination because friends had recently gone there, and from their description of the wonderful countryside and the sunshine, it did seem  very inviting! This opportunity, in a post-war era of depression and the hardship of rationing and re-construction in England, just asked to be seized! So my mother sent off a letter to Rhodesia House in London to discover how to set about  immigrating with two children.
We received a reply telling us it was a wonderful country with great prospects, as long as we were not afraid of doing our share of hard work.   The streets, we were told, were not paved with gold, but if one made the effort, a very good living could be earned.   They advised us that the housing situation was pretty difficult and suggested that Dad should travel ahead, leaving the family in the U.K, while he reviewed the local situation.  This obviously did not fit in with our plans for the whole family to drive together overland.  We wrote off to Rhodesia House once more for the necessary forms, which we duly filled in, telling them of our plans, and saying that we were prepared to camp along the way and rough it for a while at the end of the trip.   It would be bliss, camping on arrival at our Rhodesian destination, without having to move off each morning as we would obviously have to be doing along the route! 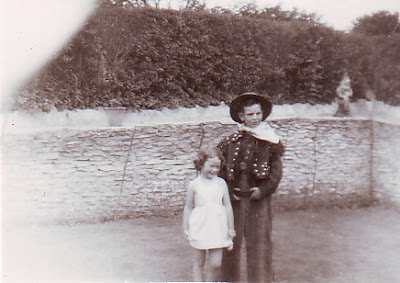 David and I; I have no idea what year this was taken or what the occasion was; a  fancy dress party from the look of it!!
So this was where all the hard preparation work began!  Dad firstly had his garage business to sell, and secondly, our house in the Cotswolds.

As to the means of transport for the trip, Mum and Dad had decided that a new Land Rover would be the ideal vehicle, but we were told by the dealers that it was virtually impossible to purchase one, as there was a long waiting list; however, when we told them the purpose for which it was required, we received fantastic co-operation and they found us a practically new one that was up for sale.

Free Promotion from 6 August 2012 until 9 August 2012
The following weeks of the next part of my life story I have put on Kindle and you can obtain it at www.Amazon.com or www.Amazon.co.uk I will however continue writing it here as well so that the blog is not interrupted.

It can also be downloaded to computers, smart-phones or tablets see Here
Posted by Zimbabwe at 06:14

Email ThisBlogThis!Share to TwitterShare to FacebookShare to Pinterest
Labels: kindle, selling up, Trek