My First Trip to Africa

Early in 1951, my father had asked me where I would like to go on holiday that year.   I am sure that any other child would probably have come up with a trip to Brighton, Wales, Ireland or even maybe France again, but no, I decided that I wanted to go to Africa!  I think this request must have left my parents a bit dumbfounded, but, so as not to disappoint me, a drive was planned through France, via Paris to Marseille and then a short flight over to Algiers.
A week was spent in glorious sunshine, seeing all the sights that Algiers had to offer, from the Casbah, which is the "old city", with a labyrinth of passageways to explore or get lost in, to trips out of town, to see the Bedouin on their camels in the desert. 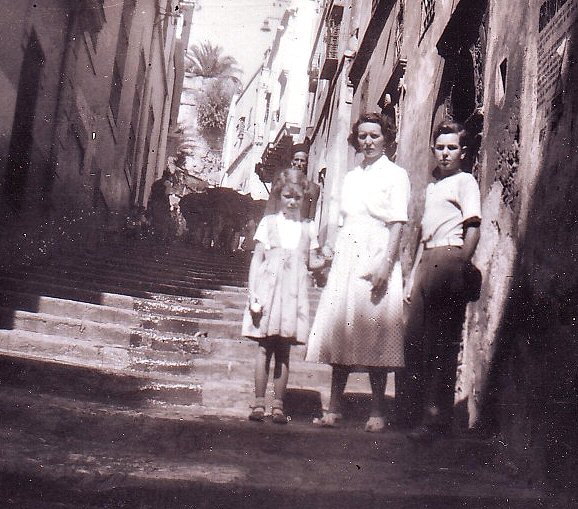 Above and below in the Casbah 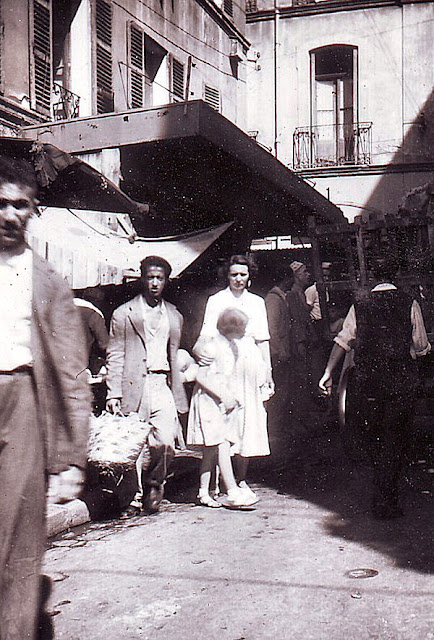 My mum was convinced she was going to meet a handsome Arab on a white charger, but the closest she came to that was our guide with a hired car! This latter was a Ford Vedette which was quite a large car for its time, manufactured by Ford  France in their factory in  Poissy from 1948-1954 and which conveyed us out on the trip to the desert. 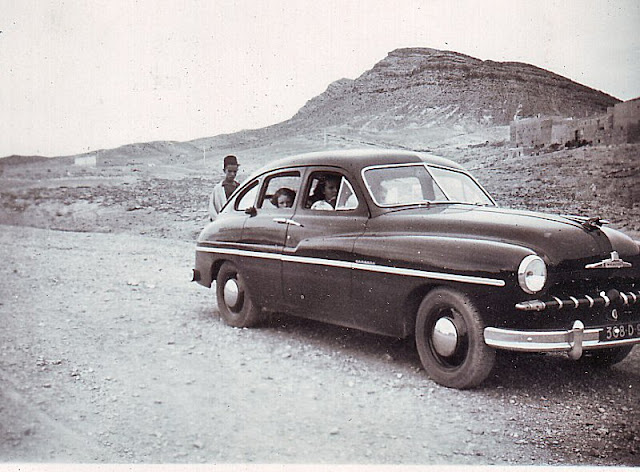 The Ford Vedette with me looking out of the back window!
The guide  in fact probably saved my Mum's life, as at one spot where we stopped, she had wandered off alone.   It was evening prayer time and many of the Bedouin  were kneeling down praying, not too far from us.   The sun was very low, and in moving away from the rest of us, Mum had walked across the long shadows of the prostrate worshippers.  A large pack of dogs came straight for her and only on command from our guide, did they stop, inches away from her!  He rescued her, and bringing her back to the rest of us, we were told never to walk across the shadows while people were at prayer; undoubtedly you were in serious danger from the pack dogs that followed the Bedouin tribes. 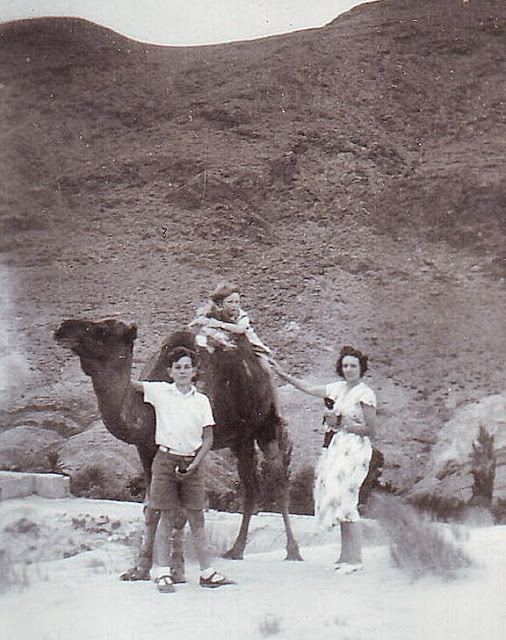 In the desert near Bou Saada, I am obviously unsuccessfully trying my riding skills on a camel! 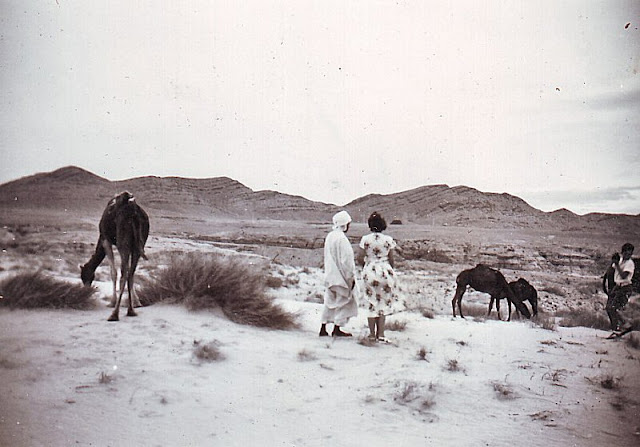 Photos above and below at Bou Saada 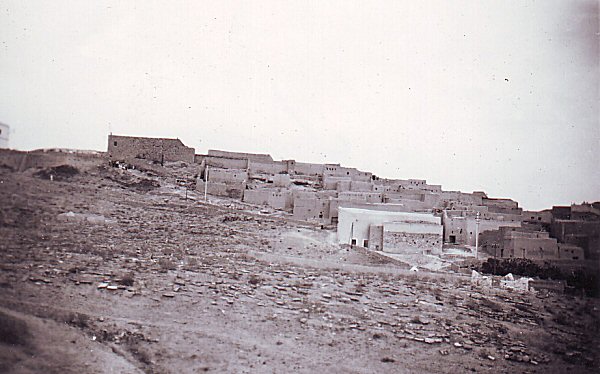 El Hamel. another village that we visited in Algeria.
After our trip out to the desert, we spent a little time back at the St George Hotel in Algiers.  The hotel has now been renamed as Hotel El-Djazair and I remember it then as being quite beautiful. 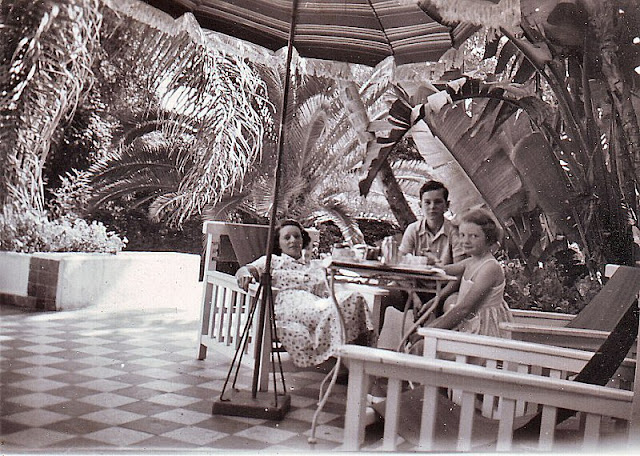 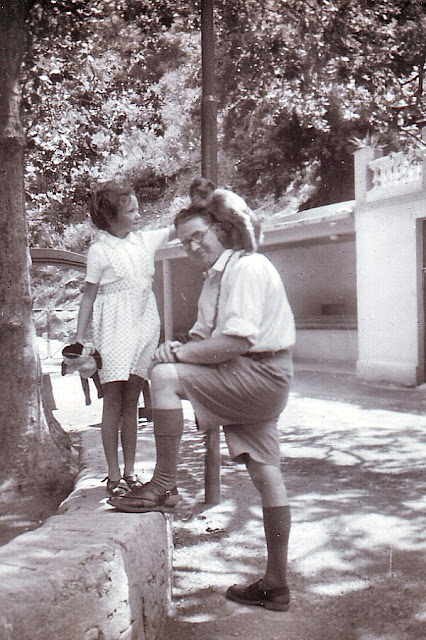 Dad and I meeting up with some of the local monkeys!  Note, I have Topsy my doll in my hand here; this is the doll that flew out of the window on our trip to France the previous year, but was eventually recovered! 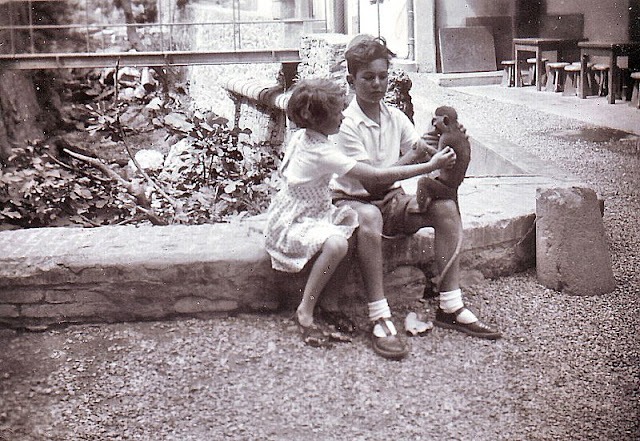 Another shot, of David and I  with one of the locals - they must have been tame in those days!! 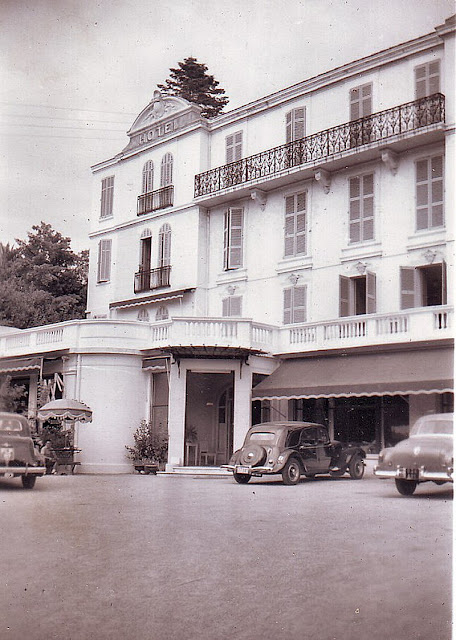 On our way home, we stopped off at the Hotel Regina in Cannes for a couple of nights.  The hotel is still there, but my guess is that the cars that are parked outside it today are a little more modern! 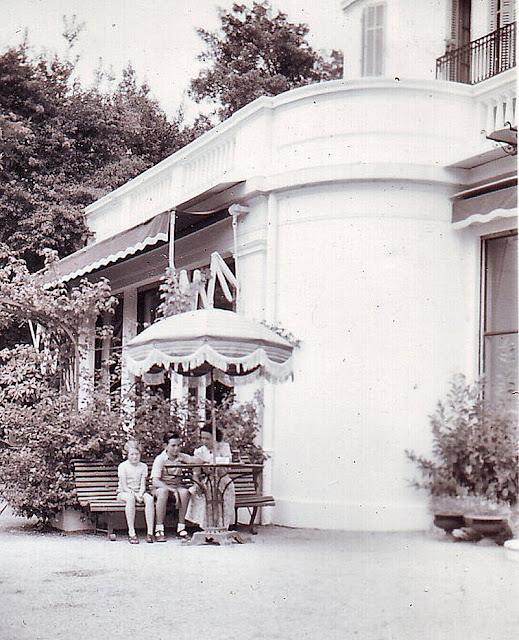 Myself, David and Mum taking a break from the sun at the Hotel Regina.
Posted by Zimbabwe at 02:41