Another horse for show jumping and starting work at Borrowdale Stud.

In August 1959, I took Hy-Li-Li to her first amateur race meeting at Gatooma, where she won both the first sprint of the day over 4 furlongs and the final race of the day over 6 furlongs!
All three of my horses were well and truly coming up to expectations and doing their best. It was not long after this, that I was out exercising Kismet and just on the last stretch home, we walked through a large puddle of water. I had forgotten Kismet’s love of water and he liked nothing better than to have the sprays watering his paddock, so he could just keep walking over the top of them. He also was the only horse I ever knew who, if he had a big enough trough to drink from, would put his head right in up to his eyes. I was digressing - the end result of the puddle incident was that he caught me completely unawares and dropped straight into it, to try and roll - rider, saddle and all! He came out of it with a slight scratch on his knee, but I ended up with a broken elbow!  This was a huge setback for me, as this time there was no plaster for support and I was in a sling for close on 6 weeks. I was told that there had to be movement and controlled exercise during the healing process, as it was thought it may set in a locked position otherwise.  I might add here that when I got home, my Mum was frantic about the scratch on Kismet's knee and cold compresses were applied to alleviate any swelling. It was only the next day that anyone believed that I had damaged my elbow and so was taken off for x-rays!!


While still in a sling and feeling sorry for myself, Dad asked me one day if I would like to help him collect some horses that had arrived at the railway station. There were seven race mares imported from the United Kingdom; initially they were all for racing and later they would be put to stud to bring in some new and excellent blood lines as part of the country's breeding programme. They were consigned to Borrowdale Stud (Borrowdale is a suburb of Salisbury), which comprised a large racing stable with stud attached. I naturally jumped at the idea and off we went to the station to collect them. It was here that I met Bill Wakefield, the owner of the stud, and his trainer Jack Perry. By the time we had settled the horses at the stud, it was arranged that I would start work there in the January of 1960. I finished school in December 1959 and so it was, with great excitement, that I went off to work in the New Year.

Working in racing stables meant a very early wakeup call, being on the road by 04h30  and with the first string of racehorses we would be out of the yard by 05h30!  By then, my elbow had healed well and I would ride work with either one of the stable lads or with our regular Irish jockey Johnny Roe, who used to come out to the stud three times a week.  Johnny, on returning to his home in Ireland a few years later, became champion jockey there 9 times.
Luckily for me, in Rhodesia I could take my car driving test at 16, so driving to work and back was not a problem. Dad bought me a very old long wheel base Lloyd (now a very rare make!) which served the purpose well. I have to admit, though, to having one serious mishap one morning on the way to work. The route at one point descended quite a steep hill and at the bottom of the hill the tarmac stopped and the road turned abruptly into a loose sandy surface. I was driving a bit too fast and on reaching the sand, I started to go into a slide; lack of experience caused me to put my foot on the brake which made the car do a complete roll-over and back onto its wheels again!  The vehicle looked a little the worse for wear(!) but was still running and I seemed to be intact, so I carried on to work. The reality of what I had done hit me when Jack Perry came running out and saw the car! He phoned my Dad and put me on a horse and sent me off to concentrate on other things. Mum and Dad came out to collect the car and took me home later in the morning. The whole episode did one good thing for me, though. It taught me never to hit the brake if your car is in a slide! In later years, I did training on a skid pan and learnt exactly how to handle that and other situations on slippery surfaces. Basically I was none the worse for the experience, just a whole lot wiser and Dad found another small car for me to use to go back and forth.

Early in 1960, Hy-Li-Li was really on form and won several point-to-points and a number of show jumping events. Dusky, meanwhile, was coping very well with the lower show jumping grades in the adult classes and Kismet was getting the odd place but was not showing any dramatic improvement.
Towards the end of 1960, Rustler joined the stable and we were then up to four horses. Rustler was a very flighty bay  about 16 hands high, with a nasty habit of ‘fly jumping’ when approaching a fence. This is similar to jumping imaginary jumps, usually when the rider least expects it! He generally succeeded in putting me in the position of being unable to correct his stride so he was in the right position for the fence we would be approaching. I spent many hours training over small fences to try and prevent his exuberance, but although he improved, we never did really get it right.
In September of 1960, we had the Horse of the Year Show at Chikarubi Farm, just on the outskirts of Salisbury. I took all four horses. Kismet and Rustler were a complete disaster, knocking fences over in all directions, Hy-Li-Li certainly did not let the side down, but in the main event for which we had to qualify, Dusky really came into his own!   It was a handicapped event, which is unusual in the show jumping world, and it involved C grade up to A grade horses.

Grading in Rhodesia was done, at that time, using points awarded for success in show jumping events, with A grade being for the most successful horses. D grade was for beginners, who hoped soon to move up the ladder!

By then, Dusky had been upgraded to C and was finding the fences just about at his limit. He managed a clear round first time on the course and then had to jump off against the clock. As there were both A grade and B grade horses in the jump off who were much larger than him, his chances were not very good as his stride was just not able to lengthen enough to cover the ground as fast as they could. What none of us had taken into consideration was that because of his small size, he was able to manoeuvre and turn far more easily, thus shortening the distance and time between fences.  I have never been so proud when the final results came through, to find that Dusky’s clear round was 0.5 of a second faster than anyone else!  There were huge celebrations with Dusky drinking beer (no champagne available) out of the Horse of the Year trophy. This was his final event in the show jumping arena, as I knew he was not capable, or large enough, of being upgraded any further, so he retired in the glory of being named Horse of the Year in 1960.  I was so proud of the little pony.
I am finishing up this episode with a few newspaper cuttings from the local Salisbury paper, in case anyone should be interested! The photos aren't very flattering and you will note that there are several minor errors of fact, my Christian name being spelt with an 'a', for one.  Also errors with my height and age, which has an apology attached! Journalism and printing processes have come a long way in the last 50 years! 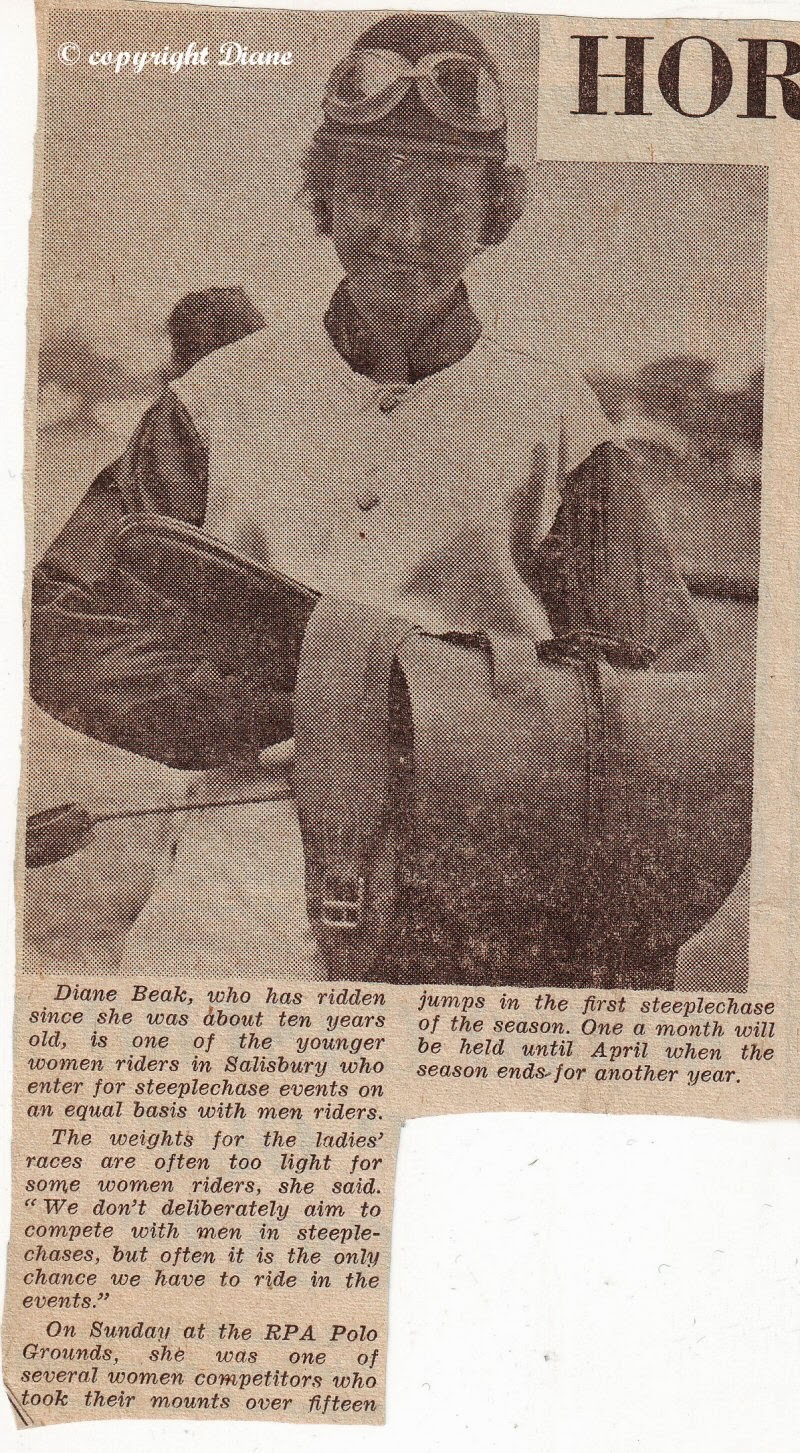