February 9 1953 Land Mileage 2006
We made an early start to try to get warm (see last post) and so that we could pack the vehicle up again and give it a good check over.     We filled up with petrol and again had to report to the Commandant.  We were led to believe that the worst part of the journey was ahead of us, but we were by now prepared for anything!
After leaving Tamanrasset, we proceeded through areas of  stony landscape, dry river beds and into a rocky wilderness.  There was a strange mixture of flat topped hills, sharp peaks and rounded domes.    In some places there was gravel, in others, sand and we seemed to be heading from one valley into another.   We had to be very careful not to follow in the tracks of trucks which had  passed by earlier, as one could get stuck in these tracks if the ground was soft.   There were track marker points at various spots, but due to constant sand storms, the countryside kept changing and the markers at times were very difficult to see!  Thank goodness we had binoculars and a compass, as we knew that our route went more or less due South.   We eventually did what we had been warned about, and found ourselves stuck in heavy sand where a truck had driven through!
We managed to push the vehicle out, aided by traction from the sand mats and then Mum, David and I had to roll up the mats and make a dash for the Land Rover, while Dad kept moving slowly forward.  If he had stopped, we would have had a repeat performance of trying to get free again.  The exercise was good for the three of us!
The track surface then changed yet again and we found ourselves on an extremely corrugated section.   The Land Rover danced and bumped its way along, giving Mum the worst headache she had ever experienced.     She was so bad that at 14h00, Dad decided that we should make camp, to give her a chance to rest and recover.    Dad and David put up the camp bed and tried to put it in as much shade as possible; at this time of day, there was only a little shade from the vehicle, so this was not easy!  Mum found a pillow and after taking a couple of tablets with a cup of tea, tried to relax and shake off the hammering that was taking place in her head!
Given the early stop, Dad thought it prudent to do a mini service and change the oil on the Land Rover, which he did with David's help.    I washed a few clothes and generally kept myself amused.  Around 16h00, Dad noticed that there was some water dripping from the vehicle's water pump.   Back to work again, and the pump was taken off and stripped right there in the centre of the Sahara!    New parts (which luckily we were carrying, thanks to Dad's foresight) were installed, but due to the fact that it got dark quite early, Dad and David ended up working by torchlight only.    Neither wanted to leave the final adjustments until the following day, as although it would have been daylight then, firstly we did not want to waste travelling time and secondly, working next day once the sun was up would have also been extremely difficult in the much higher temperatures! 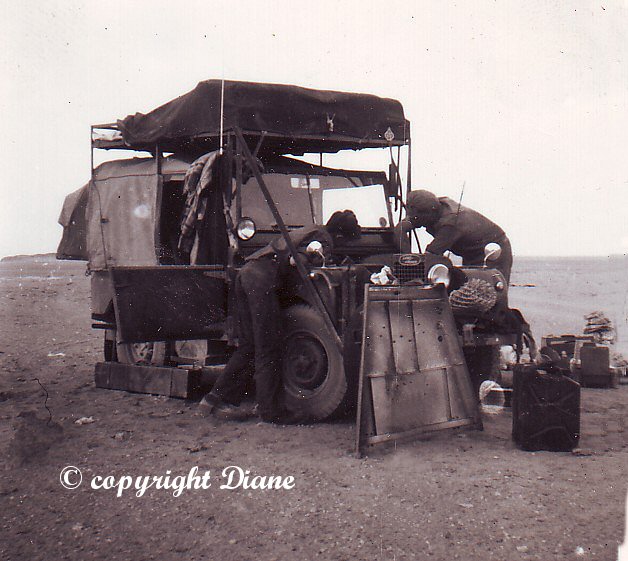 Just as they managed to finish the job, a lorry came by and the crew asked if we were all right; they pulled off a bit further up the road, where they stayed the night.   Mum by then was feeling a little better and we managed to have a late meal and a fairly good night's sleep.

I have put this section of my life story on Kindle if you should be interested:-
See
http://www.amazon.co.uk/THE-GREAT-1953-TREK-ebook/dp/B008KK0KHU/ref=pd_ys_iyr1
Posted by Zimbabwe at 07:27