An Unusual Pet and a Few Memories

At around this time, I acquired an unusual pet.  It was, (so I was told) especially bought for me, but I still think that my Dad was the one who really wanted it!  Where would I have got the idea that I would like a python???  We were very good friends with the keeper of the reptile section at Bristol Zoo and on numerous visits, we had been inside the cages with him and allowed to handle some of the snakes.  On one occasion, brother David stepped over a fairly low boarded barrier to look at something which had taken his attention.   The keeper quietly remarked that it might be a good idea if he looked down to see what was near his foot, and perhaps he should take a pace back.  Inside the barrier were a number of recently arrived crocodiles, admittedly only around a couple of feet long, but still very capable of doing a lot of damage!!

My python was imported from India and approximately twelve feet in length; they can grow much larger than this, and I believe the record for such snakes is about 30 feet in length. Most regrettably, they have now become an endangered species -  see here. I was told that the most important thing always to remember was never to let Oscar (his new name) get his tail anchored, as this was where the main strength came from.   The python is a constrictor, which means it kills its prey by squeezing,  mammals being their preferred prey.   We had a large glass heated cage built for him and he was mostly kept at Dad's garage, as the cage was obviously quite large!


I apologise for the quality of the photos; we did have the originals,  but at some time during our various national and international moves, they have either gone missing or they are still undiscovered in a so-far unopened box.  These are scanned copies of the photos that were in the Bath & Wilts Chronicle, the local newspaper.  They are very old and quite creased and discoloured but.... 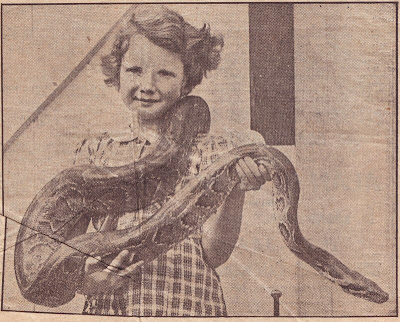 On one occasion, when we had taken him with us to our house in the Cotswolds, he had been put into a large basket with a grille over the top and left in front of the fire for warmth at night.  During the night, my Mum woke Dad up and said that she had a strange feeling that Oscar had got out of the basket!   Dad was saying it was impossible,  rolled over and immediately went straight back to sleep.   On waking in the morning, they discovered that there was a neatly coiled  snake down by their feet enjoying the warmth of their bed!  Presumably my Mum in her sleep, had felt Oscar come into the bed, but by the time she had fully awoken, he had settled down and all she was left with was the feeling that he was on the loose!  He must have left his basket, climbed the stairs and then realised that there was a nice warm bed waiting for him!  From this day on, he was always kept in the cage at night! 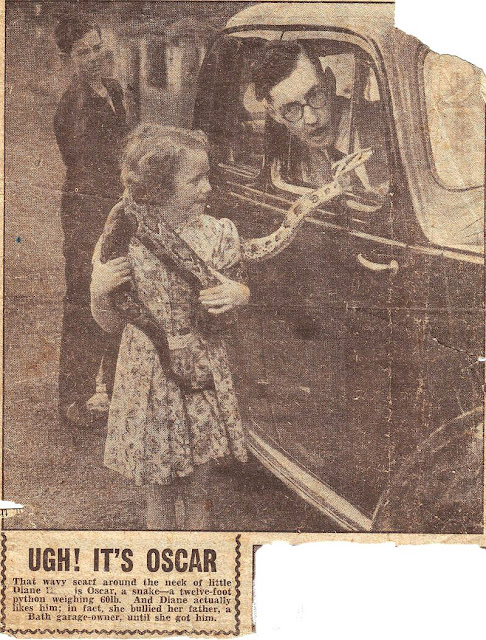 Above is a shot of my brother David filling the car's tank up with petrol at my father's garage. The caption above says I bullied my father to buy the snake, but this is mere journalese, fudging the facts to try to make a more interesting story - nothing changes!!  The car driver was not really that frightened, but he put on a good act for the newspaper photo and report. LOL!!

**********************
My parents almost always used to take David and me with them, when they went out for a meal.  We were both brought up with the rule that we could order what we liked, but once the food was in front of us, we had to eat every morsel on the plate!  This generally worked well, and neither of us ever ordered anything that we did not recognise, without taking advice from Mum and Dad.  One slip-up occurred with David, when we went to an Indian restaurant and he ordered a very hot curry.  Mum suggested that he should maybe have a medium curry, but David insisted that he liked food very hot.  Once the curry arrived, poor David struggled his way through the plateful with a red face and sweat streaming down. He did not say one word, but the relief on his face was obvious when the last mouthful disappeared.  We had both learnt the lesson that  it was  better to listen to advice where selection of restaurant food was concerned!
One other never-to-be-forgotten outing was when my folks took David and I to an evening dinner-dance at the Savoy Hotel in London. Very posh! My Dad was a wonderful ballroom dancer and I started dancing with him at quite a young age, by standing on his feet! As I got a bit heavier, he shortened his steps for me, so I could follow him with feet on the floor; as I grew, so the steps got longer and  more professional.  For many years, I could not dance easily with anyone other than my father, and my Mum always had the same problem.   On this particular occasion at the Savoy, Dickie Valentine was singing and seeing my parents with two small children, he came over and asked what we would like him to sing. At the time, the 1951 hit ‘I Taut I Taw a Puddy Tat’ was my favourite song and with no hesitation, Dickie Valentine announced that he was singing a special number for me and duly sang my favourite song.  He also sang a song for David, but I cannot recall now the title!
Posted by Diane at 07:26